‘Donald Is on Our Side,’ Says Company With Ties to Putin 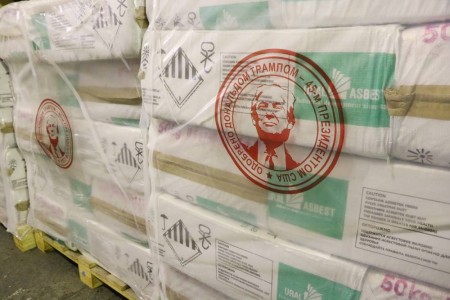 WASHINGTON – One of the world’s biggest producers of asbestos, a Russian company with ties to Vladimir Putin, is praising President Trump for allowing asbestos to remain legal in the U.S.

The company’s applause for Trump comes as Russia is poised to become the leading importer to the U.S. of asbestos, which causes diseases that kill an estimated 15,000 Americans a year. A recent study led by Jukka Takala, president of the International Commission on Occupational Health, found the death toll from asbestos exposure may be much higher, at nearly 40,000 Americans a year and more than 255,000 a year worldwide

On June 25, the asbestos producer Uralasbest posted photos on its Facebook page of pallets of its signature product, chrysotile asbestos, wrapped in plastic adorned with Trump’s image. Trump’s picture is at the center of a large red seal declaring:

APPROVED BY DONALD TRUMP, 45TH PRESIDENT OF THE UNITED STATES.”

In an English translation of the post, Uralasbest said:

Donald is on our side! … He supported the head of the United States Environmental Protection Agency, Scott Pruitt, who stated that his agency would no longer deal with negative effects potentially derived from products containing asbestos. Donald Trump supported a specialist and called asbestos “100% safe after application.” 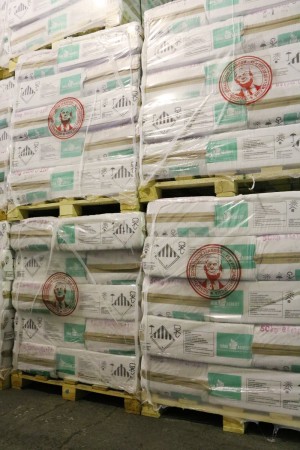 Pruitt resigned as EPA administrator last week, after an 18-month tenure marred by ethical scandals, profligate spending of taxpayer dollars and aggressive attempts to roll back public health protections. One of his last decisions was to exclude so-called legacy uses of asbestos from the scope of an ongoing safety assessment. He also declined to ban new uses of asbestos. The Obama administration had designated asbestos a priority for a new safety assessment under the nation’s new toxic chemicals law.

Trump has long rejected the scientific consensus that asbestos is so dangerous that there is no safe level of exposure. In his 1997 book, “The Art of the Comeback,” the future president claimed asbestos is “100 percent safe, once applied.” In 2012, he tweeted that if asbestos had not been removed from the World Trade Center, the twin towers “would never have burned down” in the 9/11 terrorist attacks.

Not to be outdone in showering adoration on Trump, Kostanai Minerals, the largest chrysotile asbestos producer in neighboring Kazakhstan, shared the post on its own Facebook page.

Uralasbest claims its asbestos mine in the Ural Mountains city of Asbest is the largest in the world. According to an investigation by the Center for Public Integrity, in 2009, Putin met with the head of the Uralasbest workers union, who said he “promised to support Russian producers of chrysotile, especially in situations where we find ourselves under political pressure at the international level.” The Center also reported that Kostanai Minerals has received financial backing from state-controlled banks in both Russia and Kazakhstan.

According to the U.S. Geological Survey, in 2016, roughly 95 percent of the asbestos imported into the U.S. came from Brazil, with the rest coming from Russia. The Commerce Department and the U.S. International Trade Commission estimate that 705 metric tons of asbestos came into the U.S. in 2016, compared to 343 metric tons the year before.

But in November, Brazil joined more than 60 other nations and banned asbestos. Brazil’s ban leaves Russia, Kazakhstan and China as the world’s dominant asbestos producers. With Brazil no longer providing the vast majority of asbestos to the U.S., Russia and Kazakhstan could fill the void.

“Vladimir Putin and Russia’s asbestos industry stand to prosper mightily as a result of the Trump Administration’s failure to ban asbestos in the U.S.,” said EWG President Ken Cook. “Helping Putin and Russian oligarchs amass fortunes by selling a product that kills thousands each year should never be the role of a U.S. president or the EPA, but this is the Trump administration. Russia’s interests are Trump’s interests, and any clear-eyed American knows it.”

“By allowing asbestos to remain legal, the Trump administration would be responsible for a flood of asbestos imports from Russia and other countries into the U.S., as well as the wave of illnesses and deaths that will continue for years to come,” said Linda Reinstein, co-founder and president of the Asbestos Disease Awareness Organization. “Americans know Putin does not have their interests at heart, but it’s becoming increasingly apparent that neither does Trump.”

Trump and Putin are scheduled to hold a one-on-one summit in Helsinki, Finland, on July 16.  The agenda for the meeting has not been made public, but it is safe to assume talks over trade between the two countries could be part of the discussion.