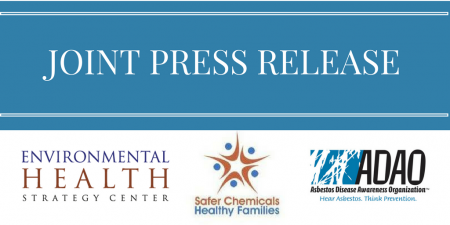 Washington, DC — Yesterday, public health advocates began the process to sue Occidental Chemical Corporation (OxyChem) for its apparent failure to inform the U.S. Environmental Protection Agency (EPA) that it imported nearly 900,000 pounds of deadly asbestos for use in an outdated technology for making chlorine. Under the Toxic Substance Control Act (TSCA), chemical companies were required to disclose to EPA by October 31, 2016 if they imported 2,500 pounds or more of asbestos in any of the prior four years. Based on publicly available information, OxyChem exceeded this legal threshold for at least three of those years, but agency records do not show a report from the company.

OxyChem’s apparent violation deprives EPA of crucial information needed to make pending regulatory decisions that could lead to a long overdue ban on all asbestos use. In December 2016, EPA named asbestos as one of the first ten chemicals to be assessed for safety under the recently strengthened TSCA. EPA must decide by June 19, 2017, whether to include the use of asbestos by OxyChem and other chlorine producers within the scope of its risk evaluation for asbestos. Based on this risk assessment, within two years, EPA must then determine whether asbestos poses an “unreasonable risk” to human health. If so, the EPA must adopt regulations under TSCA to eliminate that risk.

Three public health organizations sent a formal 60-day Notice of Intent to Sue to Occidental Chemical Corporation, the first step in a citizen enforcement action under TSCA. The groups are the Asbestos Disease Awareness Organization; Safer Chemicals, Healthy Families; and Environmental Health Strategy Center. The groups relied on a commercial database sourced from U.S. Customs and Border Protection records to document OxyChem’s import of nearly 900,000 pounds of asbestos in a series of shipments from late 2013 through the end of 2015. EPA records obtained through a Freedom of Information Act request, however, did not uncover a report from OxyChem of the toxic imports.

“EPA is currently wrestling with whether to include the chemical industry’s use of asbestos in its pending risk evaluation and how to assess the risks. If a company fails to disclose its substantial use, the agency will not have the data necessary to inform its actions,” said Andy Igrejas, national campaign director of Safer Chemicals, Healthy Families. “The original TSCA broke down in the 1980’s over its failure to ban asbestos,” he said. “EPA must get it right this time and include chemical industry use in its asbestos risk evaluation.”

All the shipments to OxyChem came from Brazil, where one of the last three asbestos mines in the world is under increasing pressure to shut down because of its health impacts on workers and surrounding communities.

“​It’s questionable whether the Chlor-Alkai industry’s use of asbestos is safe for U.S. workers and communities, and the impacts abroad may be even more troubling.  ​How many more asbestos miners in Brazil have to die before we end all uses of this deadly mineral in the United States?” asked Linda Reinstein, President/CEO and co-founder of the Asbestos Disease Awareness Organization. “Asbestos is a known killer and there is no safe level of exposure.”

Hundreds of workers in Brazil that mine, refine, and pack the asbestos for shipment are exposed to the deadly mineral with minimal protections, and suffer from nearly-always fatal mesothelioma, asbestosis, and other asbestos-linked illnesses at alarming rates, according to investigative reports. In the United States, the millions of pounds of asbestos used by OxyChem and other chlorine producers put workers in the plants, those in the shipping industry who transport it, as well as those living in communities near shipping routes and plants at risk in the event of an accident, poor handling practices or releases during plant operations.

The risk is an unnecessary one. OxyChem’s unreported asbestos imports were likely destined for its eight chlor-alkali plants, located in Kansas, Louisiana, New York, and Texas, that use an outdated asbestos-based  “diaphragm cell” technology, first commercialized in the 1890’s, to produce chlorine and caustic soda from salt water. The diaphragm is made onsite from asbestos fibers, and must be regularly rebuilt and replaced. The eight OxyChem plants, and seven similar facilities owned by the Olin and Westlake companies, are among the last remaining users of asbestos in the United States.

“Asbestos workers in Brazil are literally dying to prop up the US chemical industry’s dependence on obsolete chlorine technology, even though an asbestos-free process is readily available,” noted Mike Belliveau, Executive Director of the Environmental Health Strategy Center.

In March 2017, the groups submitted comments urging EPA to find that asbestos poses an unreasonable risk to human health and to initiate the regulatory process to ban all uses of asbestos, including use by OxyChem and other chlorine producers.

If the case proceeds to court, the advocates will seek a judicial order for OxyChem to comply with the reporting requirements. There is no provision in the law for recovery of damages, although EPA has the ability to impose fines, which the groups urge it to do.

Safer Chemicals, Healthy Families, a national coalition of 450 organizations, works to ensure the safety of chemicals used in our homes, workplaces, and in the many products to which our families and children are exposed to each day.

Environmental Health Strategy Center works to ensure that all people are healthy and thriving in a healthy economy, through affordable access to safer food, water, and products; and investments that create and retain good, green jobs.

For copies of the letters to the EPA and OxyChem, please contact Michele Setteducato at michele@drakecomms.us.