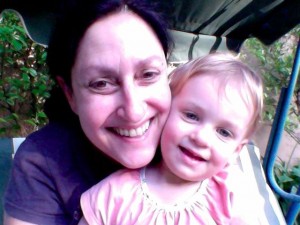 I was diagnosed with Mesothelioma in 2007 after about one year of doing all sorts of tests trying to figure out what was wrong. One of the first things I did shortly after was to start a blog. It was mainly to keep friends and family up to date with how I was doing, but also because I knew that not everybody was comfortable talking to me about it. Some didn’t know what to say, others didn’t know if I wanted to talk about it. I just thought it would be easier if I put it all out there and let people know what was happening with me and that I was fine to talk about it.

The blog was originally just for family and friends but, over time, other people came across it and were impressed by my positive attitude. So I decided to write to a wider audience. I wrote knowing that even people I didn’t know were reading it – and that made me feel good. I felt like I could make a difference. I knew nothing about Meso or cancer before I was diagnosed, but if my own personal experience was helpful to others, I was happy to put it out there. I’ve been asked to do a guest blog post here and so would like to share with you some thoughts I have about keeping positive even in the grasp of an incurable cancer like Mesothelioma.

I know at present Mesothelioma is classified as an incurable cancer. But I think, with the right mindset, there is no reason to believe that you can’t beat it. Yes, it doesn’t help if you have been diagnosed at a late stage of the cancer, having the right attitude doesn’t necessarily guarantee a good outcome, and there is no evidence that a positive attitude will slow the growth of cancer. But that is not what I am suggesting. What I am saying is that it is possible a cure is going to come along before the cancer gets you and by, keeping that in mind and having a positive attitude, it does equip you with the right frame of mind to want to fight it and win.

When I was first diagnosed, I read an article about statistics by Stephen J. Gould called “The Median Isn’t the Message.” It was a great article about how to interpret statistics relating to Mesothelioma and one I still highly recommend now. It made me realize that the stats show a distorted picture of what is really happening and that there was every reason to believe that I was on the right side of the stats. Since I was diagnosed, I knew I was up against time. But, with all the advancements in medical science, I also knew that, if I could just hang in there until a cure comes along, I’d be home free. No one knows how long it will take for a cure to be discovered or exactly how long we have until this bastard disease kills us if a cure doesn’t come along, but there is no reason to doubt that many people with Meso today will be lucky with timing. By keeping positive and working on things we can control like our immune system, pain, and attitude, we can come a long way towards beating it.

There are clinical trials and new treatments being tested on Mesothelioma around the world all the time. Knowledge is growing about all cancers exponentially. Something that can be good for one cancer might work for many others. I honestly believe that soon incurable cancers will become a thing of the past. Already, the prognosis for people with Mesothelioma has increased dramatically over the last 10 years. It is just a matter of time before a cure for Meso is out there. Our job is to hang in there until that happens.

One of the most important things is to get on top of your pain. It’s really hard to get your head on top of things unless your pain is under control. If you are always in pain, you have a constant reminder of the cancer and that can simply be depressing. When I’m not on top of my pain, especially at the times when I need breakthrough or when I need to have an increase in my medication, I have been known to burst into tears when asked by someone simply, “How are you?” But, mostly, I’m pretty much on top of things.

Also, you need to have the best medical opinion available to you. It’s very important that you have faith in your Oncologist. They literally have your life in their hands. At the same time, I think it’s also important to seek a second opinion. Your Oncologist should not see this as an insult to his or her own competence, so don’t feel afraid about offending them. Make sure your Oncologist is up with the latest in Meso treatments and is taking an interest in what is happening out there. Another thing that is really important is to make sure your Oncologist is also optimistic about the possibility of a cure being around the corner.

I’d like to share a story of what happened to me just last week. I went to two Radio Oncologists, as I am about to do radiation therapy to treat my Meso. One of them was such a pessimist. He said that Mesothelioma was incurable and that there was no point doing anything to try to stop it. I told him my plan was to hang in there until there was a cure. He looked at me like I was misguided. The other Radiation Oncologist I met with, who specializes in Mesothelioma, believes he can stop Meso for a long period of time. It wasn’t a hard decision which one to go with. It also made me angry that the pessimistic one didn’t even want to hear about the techniques the other one had been pioneering. Without hope for some treatment, there is nothing to hang onto. The second one gave me hope, the first one left me totally deflated.

In 2008, a miracle happened and, at age 46, after doing IVF before I turned 45 and having done chemo that was supposed to have affected my fertility for a couple years, I fell pregnant and gave birth to a beautiful, healthy intelligent little girl. She inspires me to want to fight this more than ever before. I have to be here for her and I’m determined to do just that.