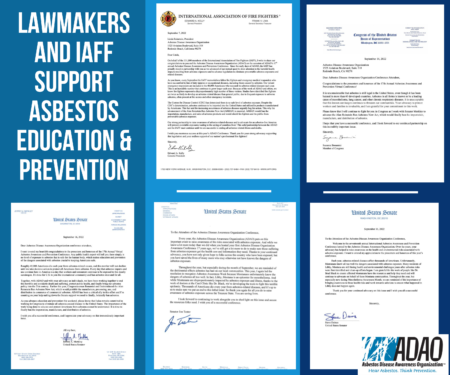 The Asbestos Disease Awareness Organization (ADAO) was thrilled and honored to receive letters of support from various politicians and nonprofits in support of our 17th Annual International Asbestos Awareness and Prevention Conference. We received letters from Senators Jeff Merkley (D-OR), Jon Tester (D-MT), and Steve Daines (R-MT), Representative Suzanne Bonamici (D-OR), and the International Association of Fire Fighters (IAFF). We know that these letters are an absolute gift to our supporters and conference attendees. It means a lot to know that the people at the head of our country’s politics are thinking about the asbestos community and fighting to make our country a safer place for all.

Senator Jeff Merkley has long been a staunch supporter of ADAO and our work, and has led the fight in getting an all-out ban passed by Congress. Earlier this year, he and Rep. Bonamici introduced the Alan Reinstein Ban Asbestos Now (ARBAN) bill to both the Senate and House. ARBAN would ban all forms and uses of asbestos to protect Americans from this lethal fiber.

In his letter to conference attendees, Sen. Merkley wrote that he would continue to fight to protect the public health of Americans.

“Roughly 40,000 Americans die each year from asbestos-related causes, and this number will not decline until we take decisive action to protect all Americans from asbestos. Every day that asbestos imports and use continue here in America is a day that workers and consumers continue to be exposed to this deadly carcinogen. It’s time for U.S. to join the international community and ban asbestos once and for all,” he said.

Representative Bonamici has also been a long-standing supporter of our work. She vowed to keep working with Senator Merkley to get ARBAN passed.  “It is unconscionable that asbestos is still legal in the United States, even though it has been banned in more than 60 developed countries. Asbestos in all forms is known to be a leadin 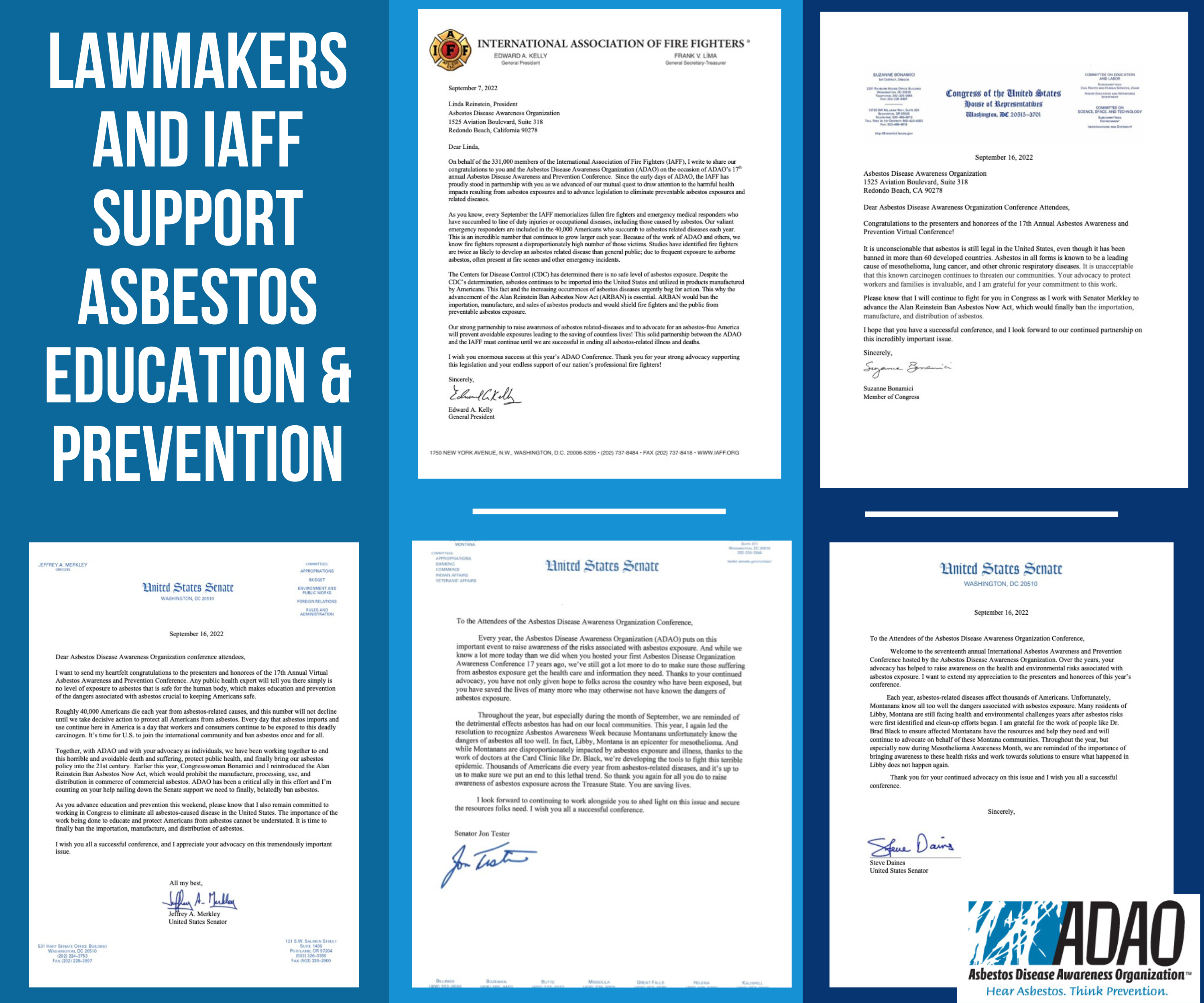 g cause of mesothelioma, lung cancer, and other chronic respiratory diseases. It is unacceptable that this known carcinogen continues to threaten our communities. Your advocacy to protect workers and families is invaluable, and I am grateful for your commitment to this work,” she continued.

Senators Daines and Tester unfortunately know the impact of asbestos because Montana has been disproportionately affected due to the mine in Libby, Montana.

Senator Tester thanked conference attendees for fighting for those in his state. “Thousands of Americans die every year from asbestos-related diseases, and it’s up to us to make sure we put an end to this lethal trend. So thank you again for all you do to raise awareness of asbestos exposure across the Treasure State. You are saving lives,” he wrote.

Since our first conference in 2005, IAFF has worked closely with ADAO. Studies have identified fire firefighters are twice as likely to develop an asbestos related disease than the general public, due to frequent exposure to airborne asbestos, often present at fire scenes and other emergency incidents. As ARBAN stakeholders, IAFF’s letter was focused on passing this important legislation. We are  grateful for their support and dedication to ADAO and ARBAN.

“The Centers for Disease Control (CDC) has determined there is no safe level of asbestos exposure. Despite the CDC’s determination, asbestos continues to be imported into the United States and utilized in products manufactured by Americans. This fact and the increasing occurrences of asbestos diseases urgently beg for action. This is why the advancement of the Alan Reinstein Ban Asbestos Now Act (ARBAN) is essential. ARBAN would ban the importation, manufacture, and sales of asbestos products and would shield fire fighters and the public from preventable asbestos exposure,” IAFF wrote.

Thank you to everyone who wrote letters. It meant the world to attendees, mesothelioma warriors, and volunteers to know that they are seen and heard in this fight.

Together, we can create change.