Senator Boxer called on ADAO to come to Washington, DC twice for a press conference, staff briefing, hearing, and meetings.  Below is my 60 second statement for Senators Boxer and Markey’s Press Conference. 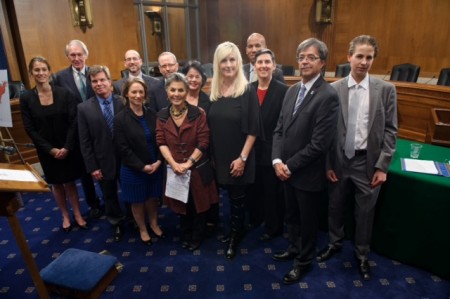 “I’m Linda Reinstein, I am not an attorney or a lobbyist, but rather a mesothelioma widow and co-founder of the Asbestos Disease Awareness Organization (ADAO). The Toxic Substances Control Act (TSCA) of 1976 has failed Americans and is dangerously out of date.

The Boxer-Markey “The Alan Reinstein and Trevor Schaefer Toxic Chemical Protection Act.” (S. 725), is a bill that represents true TSCA reform. Named after my late husband, Alan and Trevor, the Boxer – Markey bill represents hundreds of thousands of American’s who have been sickened or killed by toxic chemicals.

ADAO joins more than 450 other health, safety, and environmental organizations in opposition of Senators Vitter – Udall – Inhofe Frank R. Lautenberg Chemical Safety for the 21st Century Act,” There are more than 80,000 unregulated chemicals in homes, schools, workplaces, and commence today. We need legislation that will reform TSCA, not only for today – but our future. Legislation that will once and for all empower and ensure the EPA to expeditiously ban asbestos and manage the risk of most hazardous 1,000 dangerous chemicals. In fact, the Vitter – Udall – Inhofe bill doesn’t even mention “asbestos” and would take more than a century to analyze dangerous chemicals. Clearly, the Vitter – Udall – Inhofe was not written to protect public health.

The American Chemistry Council has their fingerprints all over the Vitter – Udall – Inhofe bill, and I believe the Environmental Defense Fund is the only organization supporting this bill.

On behalf of those silenced by asbestos and other toxins – the time is now to pass a bill that expeditiously bans asbestos and the other deadly chemicals. One life lost from an asbestos-caused disease is tragic, hundreds of thousands of live lost is unconscionable.” Linda Reinstein, President and Co-Founder, Asbestos Disease Awareness Organization

On March 18th, the United States Senate Environment and Public Works Committee  held a legislative hearing to discuss the  “Frank R Lautenberg Chemical Safety for the 21st Century Act.”  Chairman Inhofe would not allow for the Alan Reinstein and Trevor Schaefer Toxic Chemical Protection Act to be discussed.  View the full hearing online 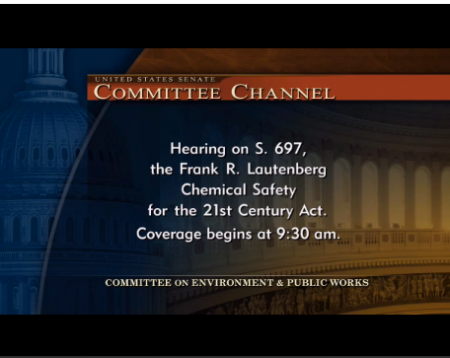