The Asbestos Disease Awareness Organization (ADAO) is proud to present a new weekly series “Meet the Speakers and Honorees,“ which will highlight esteemed participants of our highly-anticipated 15th Annual International Asbestos Awareness & Prevention Conference! The ADAO conference, which will take place on April 5-7, 2019 in Washington, D.C., combines 30 expert opinions, victims’ stories, and new technological advancements from 10 countries across the globe into one united voice raising awareness about asbestos. ADAO is the only U.S. nonprofit that organizes annual conferences dedicated solely to preventing asbestos exposure and eliminating asbestos-caused diseases. Register here today! 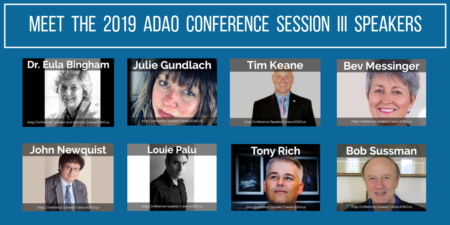 Eula Bingham Ph.D., published her first research on Histoplasmosis which caused an epidemic in workers who cleaned water towers in a city park.  Her work continued to investigate the health hazards of carcinogens from chemicals in the workplace. After the OSHA Act passed she worked on national committees to develop safety preventative measures for workers who were in industries where polycyclic aromatic hydrocarbons were hazards to workers.  She served on numerous federal committees making recommendations to prevent diseases from exposure to chemicals such as those in the petroleum and steel industries.  According to the Clayton Award she received last year at the Yuma Pacific Meeting, “Under Eula’s leadership OSHA adopted more standards (including acrylonitrile, benzene, cotton, dust inorganic arsenic and lead) than in other similar time before or since.”

Julie Gundlach is an asbestos victim turned advocate. Diagnosed with malignant peritoneal mesothelioma in August of 2006, Julie fought to find viable treatment options through five surgeries and multiple chemotherapy protocols, has remained stable since 2014. A victim of secondary exposure, Julie’s anger and frustration at the horrific amount of asbestos exposure led her to become an advocate in the fight for a ban on asbestos. She has traveled to lobby at Capitol Hill with ADAO and is committed to fighting for a complete ban on asbestos.

Tim Keane is the At-Large Vice President of the Insulators Union and also serves as the Insulators Health Hazard Fund Administrator. Tim began his career as an Insulator in 1995 when he started as an apprentice at his home Local 17 in Chicago. Tim became a Business Agent for Local 17 in 2008 and became Business Manager in 2016. Upon the retirement of Insulators Vice President Terry Lynch at the end of 2016, Insulators General President McCourt appointed Tim as Vice President in January 2017, and he was unanimously elected for a full term at the August 2017 Insulators Convention. Tim is a graduate of the National Labor College in 2014 with a degree in Business Administration. Tim is a dedicated advocate for the health and safety of his Insulator Union brothers and sisters and works to end the scourge of asbestos that has devastated so many of his union members.

Bev Messinger has been the CEO of the Institution of Occupational Safety and Health (IOSH) since October 2016. IOSH is the world’s largest membership organization – and only Chartered body – for safety and health professionals. She leads on the delivery of IOSH’s strategy, WORK 2022, which sets out how IOSH will work globally with businesses, stakeholders and individual members to shape the future of safety and health at work. Bev is a Fellow of the Chartered Institute of Personnel and Development with an impressive track record of delivering organizational transformation and cultural change across central and local government.

John Newquist (US Occupational Safety & Health) is an independent safety trainer, author, and consultant. He has been interviewed for his safety expertise and OSHA insight by NPR, BNA, Safety + Health Magazine, Mother Jones, and several more. He works with numerous companies to address their OSHA and safety compliance needs. He has a BS in Fire Protection and Safety Engineering from the Illinois Institute of Technology and a Master’s of Science in Industrial Management from Northern Illinois University. He is a Certified Safety Professional. He has taught hundreds of safety seminars across the country including the National VPPPA, Construction Safety Conference, American Society of Safety Engineers, National Fire Protection Association, and numerous Building Trade Councils. He worked for OSHA from 1983-2012 and was also the Area Director of the Peoria Area Office. He currently teaches safety classes at the Construction Safety Council.

Louie Palu is a photojournalist and filmmaker whose work has examined social political issues such as human rights, poverty and war for 27-years. He is a Guggenheim Foundation Fellow and has been awarded multiple awards for his work. He has covered conflict in Afghanistan, Mexico and Ukraine. His work has been featured in The New York Times, NPR, Der Spiegel, BBC and National Geographic. His photographs and documentary films have been featured in numerous museums and festivals internationally including at the Smithsonian National Portrait Gallery. He is the author of numerous publications including his soon to be released book A Field Guide to Asbestos (2019 Yoffy Press) which is a collection of his work from over 15-years of covering issues related to asbestos. www.louiepalu.com

Tony Rich, Industrial Hygienist, Photographic Historian and ADAO Prevention Advisory Board Member, has literally served “in the trenches” as an industrial hygienist and environmental technician in the consulting field for the past 24 years, specializing in asbestos-related work, including: inspection surveys, abatement monitoring/sample analyses, regulatory compliance, and worker training. He has also received microscopy training from McCrone Research Institute for identification of bulk asbestos via polarized-light microscopy (PLM). Through the course of his occupation and personal endeavor, Tony has developed an extensive and compelling collection of asbestos-related photographs, product materials, artifacts, historical books, industry documents, film archives, and other related media which have been utilized in a multitude of applications for various organizations worldwide, including, but not limited to: product and material research, asbestos awareness education blogs, informational presentations, corporate and governmental training programs, regulatory guidance documents, science and trade publications, university textbooks, museum & conference exhibits, and even as legal evidence.

Robert Sussman, JD, is the principal in Sussman and Associates, a consulting firm that offers advice on energy and environmental policy issues to clients in the non-profit and private sectors.  He is also an Adjunct Professor at the Georgetown University Law Center and was a Visiting Lecturer at Yale Law School. Bob served in the Obama Administration as C0-Chair of the Transition Team for EPA and then as Senior Policy Counsel to the EPA Administrator from 2009-2013. He served in the Clinton Administration as the EPA Deputy Administrator during 1993-94. At the end of 2007, Bob retired as a partner at the law firm of Latham & Watkins, where he headed the firm’s environmental practice in DC. Bob was a Senior Fellow at the Center for American Progress in 2008. He is currently serving on the Board on Environmental Science of the National Academy of Sciences and as a Commissioner of the Interstate Commission for the Potomac River Basin. Bob is a magna cum laude 1969 graduate of Yale College and a 1973 graduate of Yale Law School.  Bob has posted numerous blogs on the Brookings Institution Website and elsewhere and published articles in the Environmental Law Reporter and other publications.

Check back next week for the fourth installment of “Meet the Speakers and Honorees” featuring our 2019 conference Session 4 Speakers.