The Asbestos Disease Awareness Organization (ADAO) is proud to present a weekly series “Meet the Speakers and Honorees,” which will highlight the esteemed participants of our highly anticipated 16th Annual International Asbestos Awareness & Prevention Conference! The ADAO conference, which will take place on April 3-5, 2020 in Washington, D.C., combines 30 expert opinions, victims’ stories, and new technological advancements from nearly 10 countries across the globe into one united voice raising awareness about asbestos. ADAO is the only U.S. nonprofit that organizes annual conferences dedicated solely to preventing asbestos exposure and eliminating asbestos-caused diseases. Register here today! 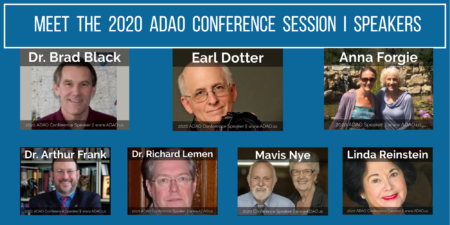 Brad Black, MD, (SLT Director, Eastern Region) has been involved with ADAO in various capacities since before the first Asbestos Awareness Conference in Washington, DC in 2005. Marilyn is the widow of Joe Amento, Jr., who died of mesothelioma at the age of 53, only 6 months after his first symptom. Joe was exposed to asbestos approximately 40 years prior while visiting his father at one of the several asbestos plants, and playing on asbestos scrap piles in the small borough of Ambler, a Philadelphia suburb. Marilyn has a Master’s Degree in Human Services Management from The Heller School of Brandeis University, and is the proud Mom of two college students, Joe and Julie. She channels her grief and anger with the as Brad Black, MD has been the Medical Director and CEO for the Center for Asbestos and Related Disease (CARD Clinic) in Libby, Montana since 2000. He has been a physician in the Libby medical community since 1977 and became the Lincoln County Health Officer in 1984. Beginning in 1999, he worked closely with Dr. Alan Whitehouse, a Spokane, WA pulmonologist, for 9 years. Since 2000, Dr. Black has had the opportunity to care for thousands of patients and this longitudinal observation of progressive pleural fibrosis has led to a clear characterization of Libby amphibole asbestos disease. CARD continues to provide asbestos health screening and care to a population with significant Libby Amphibole exposure and related diseases. In 2008 he presented at the National Institute of Health/National Cancer Institute about the progressive pleural fibrosis and mesothelioma identified in those exposed to Libby amphibole asbestos. He was instrumental in initiating research on Libby amphibole asbestos health effects. His work has expanded into research leading to an association with pulmonologists and occupational medicine specialists from multiple academic centers around the U.S. In 2010, Dr. Black became an adjunct professor at Mount Sinai School of Medicine in New York City. He has collaborated on a number of professional journal publications, and most recently he participated in a National Institute of Environmental Health Sciences working group that developed a publication on the non- neoplastic, pleural endpoints. Today, Dr. Black continues his dedicated efforts to providing excellent healthcare, outreach, advocacy and research for asbestos related diseases.

Earl Dotter is the Photographer and Creator of the exhibit BADGES: A Memorial Tribute to Asbestos Workers. Earl began photographing coal miners in 1969, then the most dangerous job in America. After which, he focused on other hazardous occupations in the USA. After 30 years of documentation he created the exhibit and book, THE QUIET SICKNESS: A Photographic Chronicle of Hazardous Work in America. He has been a Visiting Scholar at the Harvard School of Public Health since his appointment in 1999. In the year 2000, Dotter received an Alicia Patterson Foundation Fellowship to document commercial fishing. It has become our nation’s most dangerous trade. After 9/11, he photographed the rescue recovery effort at Ground Zero. For that exhibit project he received APHA’s Alice Hamilton Award. Currently, Dotter is currently touring his retrospective exhibit, LIFE’S WORK, A Fifty Year Photographic Chronicle of Working in the U.S.A. His recently published book of the same name is a companion to the touring exhibit.

Anna Forgie, is a lawyer in Washington, DC, where she also serves as an elected Advisory Neighborhood Commissioner. Anna’s mom, Patty Forgie, lost her life to peritoneal mesothelioma on May 4, 2017. Patty was a lifelong explorer and adventurer. Her creative spirit, energy, and love brightened the lives of so many. Anna’s sister, Julia Forgie, started the non-profit Mother’s Day Meso Run, an annual race held in Los Angeles to raise awareness about mesothelioma.

Arthur L. Frank, MD, PhD is a physician board certified in both internal medicine and occupational medicine and currently serves as Professor of Public Health and Chair Emeritus of the Department of Environmental and Occupational Health at the Drexel University School of Public Health in Philadelphia. He is also a Professor of Medicine (Pulmonary) at the Drexel College of Medicine. He also holds a position at Drexel as Professor of Civil, Architectural and Environmental Engineering. A life-long academic, Dr. Frank has previously taught at Mount Sinai, the University of Kentucky and in the University of Texas System. He has served many governmental agencies in the US and has carried out research and has been a governmental advisor internationally. Trained in both occupational medicine and internal medicine, Dr. Frank has been interested in the health hazards of asbestos for more than 35 years. He has published a great deal of work on the hazards of asbestos, and clinically cared for asbestos affected patients. He has lectured internationally about the problems of asbestos, and worked in many settings looking at the diseases caused by this material. His research interests have been in the areas of occupational cancers and occupational lung diseases, as well as agricultural safety and health. For thirty-seven years he held a commission in the U S Public Health Service (active and inactive) and served on active duty both at the NIH and at NIOSH. Arthur is the ADAO Science Advisory Board Co-Chair.

Richard Lemen, PhD, MSPH is a retired Assistant Surgeon General of the United States and also served as the Acting Director and the Deputy Director of the National Institute for Occupational Safety and Health before his retirement. He has been a practicing epidemiologist for more than forty years and has taught graduate level courses on environmental and occupational health issues, including asbestos, at the Rollins School of Public Health at Emory University. He has also testified on behalf of asbestos victims; Dr. Lemen is a world-renowned author, speaker, and lecturer on this topic.

Mavis Nye is a Mesothelioma survivor from the United Kingdom! In 2009, Mavis Nye was diagnosed with pleural mesothelioma, a consequence of the asbestos fibers that often coated her husband Ray’s uniform from the Royal Naval Dockyard in Chatham. She was told that she had 3 months to live. However, rather than accept this prognosis, Mavis decided to fight. She fought in treatment, and by getting involved in the MesoWarriors, an online support group that assists asbestos victims and their families. Today, almost nine years after the three months she was originally given to live, Mavis —and Ray—continue their work with the MesoWarriors, which allows Mavis to share her story across the UK and around the world giving hope to asbestos victims and demanding change from people with the power to create it. As she puts it, she has been given another chance at life so that she can help other sufferers.

Linda Reinstein is the President/CEO and Co-Founder of Asbestos Disease Awareness Organization (ADAO). Reinstein became an activist when her husband, Alan, was diagnosed with mesothelioma in 2003. She co-founded the Asbestos Disease Awareness Organization in 2004, and now serves as President and CEO.  Reinstein has been a strong political voice for justice in every major asbestos-related issue. Reinstein, a highly sought-after international speaker, has frequently served as a Congressional witness and presented at the Department of Labor (OSHA), British House of Commons, United Nations Congress, American Public Health Association, and to other audiences around the world. Recognized as an expert with nearly 40 years of nonprofit experience in building and sustaining grassroots organizations, Reinstein specializes in developing, implementing, and leveraging integrated social media campaigns. Over the years, Reinstein has been asked to create social media educational materials and facilitate workshops. Focused on national and international occupational and environmental disease prevention, Reinstein’s proficiency in the powerful advocacy space of online media has greatly increased the effectiveness of ADAO’s core mission of education, advocacy, and community support actions. She has won many prestigious awards including the Global Impact Award (2013), from the Independent Asbestos Training Providers; Bruce Vento Hope Builder Award (2011), from the Mesothelioma Applied Research Foundation; the highest level of the Presidential Volunteer Service Award for her 4,000 hours of volunteerism during her lifetime (2010); and the Heart and Soul Award in from the Manhattan Beach Women in Business Association (2005).

Check back next week for the second installment of “Meet the Speakers and Honorees” featuring our 2020 conference Session 2 Speakers.