Skip to content
Home/Blog/Memorial Tributes to Stephen Kotoloane, a Fearless and Selfless Leader for Asbestos Victims in South Africa and Around the World

Memorial Tributes to Stephen Kotoloane, a Fearless and Selfless Leader for Asbestos Victims in South Africa and Around the World

Donations in honor of Stephen Kotoloane can be mailed to to the Asbestos Relief Trust at atPO Box 86, Parklands, 2121 South Africa

Stephen Kotoloane, an amazing ban asbestos activist, founder and chairperson of the Asbestos Interest Group (AIG), and community leader in South Africa and around the word, has suddenly and unexpectedly passed away. Tina Cruz described Stephen so well, “Stephen was a wonderful, considerate, generous and kind human being who gave his life to help asbestos sufferers when he first learned about their plight. We should honour and celebrate his life.” Please keep his family in your thoughts and prayers.” ~ Linda Reinstein

“Stephen was a wonderful and compassionate man as well as a leading advocate for the banning of asbestos. I have very fond memories of spending quality time with him on my visit of the abandoned asbestos mines around Kuruman SA and learning from him about the plight of those South Africans affected with asbestos-related diseases. His work to alleviate their suffering and to right the wrong for them will long last and is a sterling example of how one person can effectuate change. I will miss you greatly Stephen and I send all my thoughts and prayers to your family. You were a great man and a blessing for me to know and work with. God bless you and your family.” ~ Dr. Richard A. Lemen, Assistant Surgeon General, USPHS (ret) 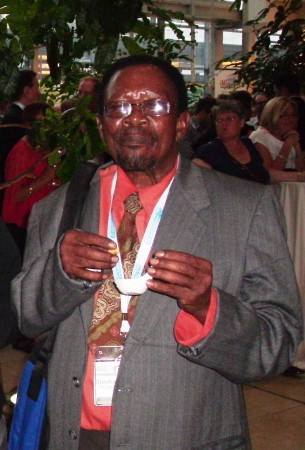 “I met Stephen Kotoloane in late 2003 on my first trip to Kuruman, South Africa. He was described to me by Dr. Sophia Kisting, someone I also greatly admire, as a “man of personal integrity.” He and his band of dedicated Facilitators from the Asbestos Interest Group (AIG) did the serious work of surveying the communities of the Northern Cape for environmental asbestos contamination. The more I worked with Stephen, the more I came to realize that he was indeed a man of integrity; and a man who sought justice for those living in the shadow of the Asbestos Hills; for those who had been left in the dust of abandoned asbestos mines and mills. That very dust blows insidiously into their homes, along their roads and walking paths, swirls through their gardens, schoolyards and churches. Stephen never lost sight of this injustice and he never stopped working to remedy it. Stephen Kotoloane started as my colleague and quickly became, to my undying gratitude, a true friend. We traveled together throughout the Northern Cape, North West, Limpopo, and Mpumalanga provinces and even into Swaziland together. He spoke often with loving words of his family and he never lost sight of our mission. Stephen reminded me as late as last year at the International Mesothelioma Conference in Cape Town, that what we did together mattered because it was the first systematic effort to map the real extent of contamination in the former asbestos mining communities and now, for the first time, “we know how bad it really is.” Stephen and his wife lived in one of those communities (Ga-Mopedi) and long after my research was complete, he and the AIG continued their tireless struggle to bring relief to the former asbestos mining communities. His leadership, integrity and kindness will be missed. The world is a lesser place without him in it. With Stephen’s passing, asbestos sufferers and those who are still continually exposed to this horrendous dust have lost a true champion, and I have lost a true friend.” ~ Robert Jones, Ph.D., Environmental Consultant

“I first met Stephen Kotoloane in 2004 as a young attorney working on a case against a foreign-based company that had owned asbestos mines in South Africa. I was young and naïve and, with my city ways and point of view, somewhat arrogant about the case and what I thought our clients wanted and needed.

Stephen was introduced to me as the head of the Asbestos Interest Group (AIG), a community-based advocacy group which, through its mobilization of communities affected by asbestos in the Northern Cape, was instrumental in securing victory in a landmark case in South Africa which saw the creation of the Asbestos Relief Trust in 2003. The Trust was set up to provide compensation to individuals who had developed asbestos related diseases as a result of the mining activities of several asbestos mining companies. Through his kind and non-judgmental manner, and infinite patience, he helped me to understand the real issues.

Stephen dedicated his life to help those affected by asbestos and whilst a great battle had been fought and won with the formation of the Asbestos Relief Trust, he did not stop with his fight to ensure that the asbestos legacy, which had had such a negative impact on his and other communities, was addressed. He continued notwithstanding severe resource constraints – the AIG had limited and sometimes no funding but under his leadership they continued to work tirelessly and selflessly, for no personal gain.

Stephen was a humble and generous man who always favoured compromise to ensure inclusion of all points of view and sought unity above all else. I never knew him to utter words in anger, he was always smiling and had a legendary sense of humour. He loved his community and was a great friend to all who had suffered adversity.

I am honoured to have counted you as a friend and will miss you greatly Stephen. Rest in peace.” ~ Tina da Cruz, Asbestos Relief Trust