Skip to content
Home/Blog/Mesothelioma Awareness Day Reflection: A Year of Landmark Steps Forward for Prevention and Policy to End the Man-Made Asbestos Disaster

Mesothelioma Awareness Day Reflection: A Year of Landmark Steps Forward for Prevention and Policy to End the Man-Made Asbestos Disaster 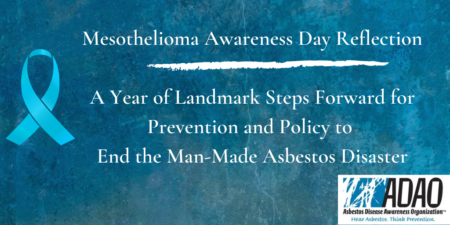 This year’s Mesothelioma Awareness Day is extra special to the Asbestos Disease Awareness Organization (ADAO) as it marks the one year anniversary of the U.S. House of Representatives Energy and Commerce (E & C) Subcommittee referred the Alan Reinstein Ban Asbestos Now (ARBAN) Act of 2019 to the full E & C Committee.

ADAO would like to again thank the House Champions: Chairman Frank Pallone (D-NJ), Representative Suzanne Bonamici (D-OR), Representative Elissa Slotkin (D-MI), Ranking Member Greg Walden, Chairman Paul Tonko (R-NY), Ranking Member John Shimkus (R-IL) for their hard work and dedication to this cause. They are the reason the bill moved forward a year ago, and they are still fighting for ARBAN today.

“This is an important step forward and one that I believe can lead finally to ending the use of asbestos in this country,” said Chairmen Pallone following the landmark decision. “We’ve known the dangers of asbestos for decades but it’s still in use and still killing 40,000 Americans each year. That’s interesting because when I go around a lot of people think it has been banned and are surprised to find out-it hasn’t. So today we are saying enough is enough.”

In November, the E & C Majority and Minority worked hard to reach a landmark bill which was later voted out of the U.S. House of Representatives Committee on Energy and Commerce with a bipartisan vote of 47-1.

“While the EPA fiddles, Americans are dying,” said Senator Merkley in a press release following the mark-up last year. “More than 60 other nations have already recognized asbestos as the deadly substance it is, and acted to protect their citizens with the obvious response: A ban on asbestos. It’s time for us to catch up to the rest of the developed world, and end this dangerous public health threat once and for all.”

Although it is known that asbestos is a carcinogen that has no safe level of exposure and causes diseases including mesothelioma, lung cancer, and asbestosis, the fiber still remains legal and lethal in the United States. In fact, the U.S. is the only western industrialized nation to have not yet banned the fiber. Unfortunately, though the Environmental Protection Agency (EPA) has had plenty of time to ban the known carcinogen, nothing has changed in the past year. Instead, they released a dangerously narrow Asbestos Draft Risk Evaluation that is soon to be shot down by the Science Advisory Committee on Chemicals (SACC). The asbestos draft risk evaluation is fundamentally flawed and understates the serious risks of asbestos to public health. As the SACC Report confirmed, the draft evaluation contained multiple omissions and exclusions, leaving the public at dangerous risk of deadly asbestos exposure.

The four key actions that the bill aims to accomplish are:

As fires rage through California, Oregon, and Washington state, the ARBAN-mandated study of legacy asbestos is now more important than ever. Events like these are devastating and unpredictable, but seeing asbestos-induced diseases decades later in these same communities is a tragedy we can prevent if we have the information necessary to protect families and brave first responders. This is why we need ARBAN.

The bill has nearly 70 cosponsors and over 30 national and international organizations and unions supporters. Since the November markup, three different letters were sent to Speaker Nancy Pelosi signed by supporters of the bill; nearly 40 scientists and experts; and ADAO.

We urge Congress to take the next step and move the bill to the House floor for a full vote and look forward to supporting Senator Jeff Merkley (D-OR) and Senator Steve Daines’ (R-MT) Alan Reinstein Ban Asbestos Now Act.