Skip to content
Home/Blog/Mesothelioma Warriors Unite for the Special Release of “Warren Zevon’s Greatest Hits … According to Judd Apatow” Drops on October 24, 2020

Mesothelioma Warriors Unite for the Special Release of “Warren Zevon’s Greatest Hits … According to Judd Apatow” Drops on October 24, 2020 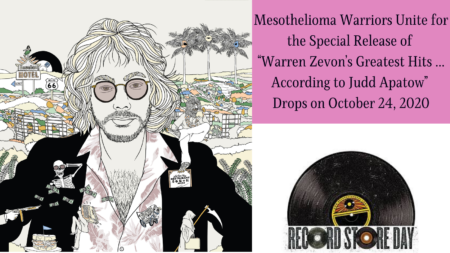 Judd Apatow, writer and director of King of Staten Island, Knocked Up, and many more smash hits, celebrates legendary Warren Zevon‘s back catalog with a new, limited vinyl release exclusively for Record Store Day 2020, this year held on October 24. Produced and curated by Apatow and Bill Inglot, “Warren Zevon’s Greatest Hits (According To Judd Apatow)” available from Rhino Records, collects Judd’s favorite Zevon hits, live performances, and deep cuts. There is a limited number of records available for purchase. Be sure to find your local record store now so you can get one on October 24!

A portion of proceeds from this album will be donated to the Asbestos Disease Awareness Organization (ADAO), an independent nonprofit organization, for which Jordan Zevon has served as the National Spokesperson for 15 years. In 2003, his father, musician Warren Zevon, passed away from mesothelioma, a preventable asbestos-caused cancer that takes nearly 40,000 American lives each year.

“Warren Zevon’s honesty, wit, and storytelling has been a major inspiration in my work,” Apatow wrote for the album’s liner notes. “He is my north star. He reminds me to go deep. His music is fun, dark, and deeply emotional all at the same time.”

Every year, Apatow celebrates Warren Zevon’s life with a tribute at Largo in Los Angeles, featuring performances by Zevon’s friends. For this curated release, a bonus track from the March 2016 Largo Show performed by Taylor Goldsmith (of the band Dawes) and Blake Mills is included alongside twelve classic Zevon performances.

“I was lucky enough to get to work with Warren Zevon when he appeared on the Larry Sanders show and we made him play the French inhaler over and over again, just for our amusement,” said Judd Apatow at this year’s virtual tribute. “His music is always such an inspiration to me because it’s so emotional and honest and funny, and it’s just the tone I’m always trying to hit. So I owe so much to him. He really has such a gigantic influence.”

“I first understood Judd’s love for my Dad’s music in an incredibly moving scene in Funny People where Adam Sandler’s character, faced with his own mortality listens to, ‘Keep Me In Your Heart.’ That was followed by an annual tribute concert co-hosted by Jackson Browne. But I was blown away when Judd and Rhino Records approached me about releasing, in honor of record store day, Judd’s personally cultivated, ‘Best of’ album (and by album I mean album. Better dust off the record player!),” said Jordan Zevon about Record Store Day and Judd’s album. “What really sent this honor and experience over-the-top was when everyone involved agreed to donate the proceeds to The Asbestos Disease Awareness Organization, for whom I’ve had the honor to be the National Spokesperson for over 15 years. Asbestos is not banned in the U.S. and the no-brainer bill to ban it is being ignored by some no-brainers in our government. Asbestos has shown up in things like teen make-up kits. It’s enough already.”

Warren Zevon’s Greatest Hits (According To Judd Apatow) is available exclusively in brick and mortar record stores for the annual Record Store Day event on October 24, 2020. There is a limited amount of 4,500 records from Rhino Records.

On Record Store Day, we encourage you to (safely!) stop into your local record store in search of Apatow’s version of Warren Zevon’s Greatest Hits and support ADAO in order to ban asbestos and save hundreds of thousands of American lives.