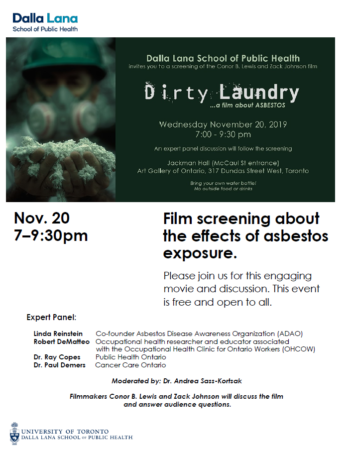 On November 20, ADAO will be at the Dalla Lana School of Public Health in Toronto, Canada for a screening and discussion of the asbestos documentary, Dirty Laundry. Organized by Dr. Christine Oliver, this is another very exciting “Art, Advocacy, and Academia” screening and discussion which will bring together experts including Paul Demers, PhD, MSc; Ray Copes, MD, MSc; and Robert Dematteo, MA, DOHS to talk about the impact of asbestos exposure on public health. The filmmakers Conor Lewis and Zack Johnson, and I will also join the discussion as participants.

Canada leads North America having banned asbestos effective December 30, 2018; however, the United States is leading the race to the bottom by allowing raw asbestos and contaminated products to be imported and used every day. In 2017, asbestos-caused diseases claimed the lives of nearly 40,000 Americans, enough to fill the Fenway Park stadium. Yet this deadly carcinogen, which causes a number of cancers and diseases, including mesothelioma and asbestosis, remains legal in the U.S.

This film highlights the difficulties and sorrow that families face when they are confronted with a mesothelioma diagnosis. Directed by Lewis and Jonson cousins, the documentary follows the pair as they set out on a cross-country bike ride with a camera crew and a mission: to gather information on the deadly disease that killed their grandmother.

“Our goal at the outset was to make a true and honest film about this problem, told through the lens of our family,” Conor and Zack said. “Ultimately we wanted to tell this story to a whole new generation of home renovators and future change-makers.”

From California to New York—a 4,200 mile bike ride—Conor and Zack interviewed surviving family members, doctors, activists and members of communities in order to reveal the stark reality of corporate disregard for public health and the environment.

Many of our ADAO Warriors and Advisory Board Members were interviewed for the film, including Dr. Courtney Broaddus, Dr. Brad Black, Marilyn Amento, Julie Gundlach, Mike and Jessica Mattmuller, Jordan Zevon, Dusti Rice-Thompson, and others.

Only in the intersection of art, advocacy, education, and community is true change possible. This documentary emphasizes the human suffering caused by asbestos in commerce, and ADAO is honored to be able to spread its message. As we shine a light on our country’s asbestos-problem, we simultaneously encourage support for the bicameral Alan Reinstein Ban Asbestos Now Act. The 2019 version of ARBAN will save lives by banning asbestos use and importation, without exceptions or exemptions within a year of enactment.

We know the Dirty Laundry screening and discussion will advance prevention in Canada and the United States. We look forward to being a part of this great event and advancing both knowledge surrounding asbestos and an asbestos ban in order to protect public health.

Together, we can make change happen.  Please read more details about the exciting event below.

Linda Reinsten: Linda Reinstein became a public heath advocate after her husband, Alan, was diagnosed with mesothelioma in 2003, an asbestos-caused cancer. One year later, she co-founded the Asbestos Disease Awareness Organization (ADAO), dedicated to education, advocacy, and community support. During the past 15 years, Reinstein has been a strong political voice for major local, national, and international asbestos-related issues and frequently serves as a Congressional witness. Recognized as a top public health influencer, Reinstein has shaped public policy, delivered over 100 national and international speeches, and built and sustained a diverse community to protect public health and the environment. As a strategic storyteller, Reinstein’s prevention and political campaigns have reached global audiences and affective change.

Robert DeMatteo: Robert DeMatteo, M.A., D.O.H.S, is an occupational health researcher and educator associated with the Occupational Health Clinic for Ontario Workers (OHCOW). He has worked on a number of research projects as a Research Associate at York University with the National Network on the Environment and Women’s Health. There he conducted research on occupational exposures of women in the automotive plastics industry in conjunction with a major case control study of breast cancer and reproductive health with Drs. James Brophy and Margaret Keith. Prior to this, he was Occupational Health Director for the Ontario Public Service Employees Union. At OPSEU he conducted extensive research on the hazards faced by health care workers, the health impact of work on video display terminals, and electromagnetic fields. His work on VDTs in the 1980s led to the publication of his book, TERMINAL SHOCK, a comprehensive compendium on the ergonomic, chemical and radiation hazards associated with working on VDTs. His work with the many thousands of public servants who work in the provinces offices brought him in contact with the perils of sick building syndrome as well as buildings contaminated with asbestos. He and his wife Dale are currently conducting a retrospective exposure study of the plastics industry for OHCOW. This latest project is similar to the project they conducted at the General Electric plant in Peterborough, uncovering a massive toxic legacy at that plant. This latter study is now published in the peer reviewed Journal New Solutions.

Dr. Paul Demers: Paul Demers is the Director of the Occupational Cancer Research Centre, funded by Cancer Care Ontario, the Canadian Cancer Society, the Ontario Ministry of Labour, and through grants from a variety of federal and provincial agencies. He is a Professor with the Dalla Lana School of Public Health of the University of Toronto and his research has focused primarily on occupational cancer, as well as other occupational diseases. He has been a member of many national and international expert panels dealing with occupational and environmental cancer, including for the most recent evaluation of asbestos by International Agency for Research on Cancer and the U.S. Institute of Medicine that reviewed asbestos.

Andrea Sass-Kortsak, PhD, CIH, ROH is an Associate Professor, Division of Occupational & Environmental Health, Dalla Lana School of Public Health (DLSPH), University of Toronto. She has a PhD in Epidemiology and is a professional Occupational Hygienist, concerned with the identification of health hazards (including asbestos) in the workplace, the evaluation and control of the hazards and the development, implementation and evaluation of policy, programs and procedures to reduce risks. For over 35 years, she has been instrumental in the graduate professional training of Occupational Hygienists, including teaching courses covering a broad range of topics. Her research interests include the development of methods for improving estimates of exposure, the assessment of factors influencing workplace and environmental exposures and assessment of occupational risk factors in disease development. She has held a number of senior academic administrative appointments, including Vice Dean, Graduate Affairs in the Faculty of Medicine (2006-11) and inaugural Associate Dean, Academic Affairs in the Dalla Lana School of Public Health (2011-15). Recently, she was one of three members of an Expert Review Panel, commissioned by the University of Toronto to provide advice and recommendations with respect to the University’s asbestos program on all three campuses, including an evaluation of oversight and resources provided to the UofT Asbestos Management Program.

Please bring your own water bottle, refill stations are on site.
No outside food or drinks are allowed.