Skip to content
Home/Blog/No Borders — No Boundaries. ADAO’s first visit to Colombia to Participate in “Asbestos: A Silent Killer?” Conference at the University Del Rosario

No Borders — No Boundaries. ADAO’s first visit to Colombia to Participate in “Asbestos: A Silent Killer?” Conference at the University Del Rosario

Colombia’s Rosario University Hosts, Asbestos: A Silent Killer?, a Seminar to Discuss the Hazards, Controversies, and National and International Activism 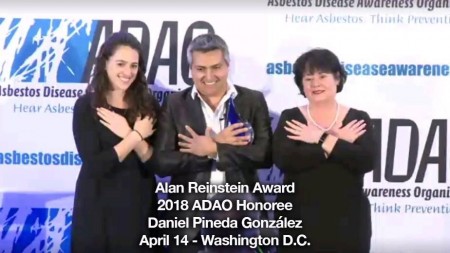 Next week, I will have the opportunity to participate in the first ever “Asbestos: A Silent Killer?” Conference at the University Del Rosario in Bogotá, Colombia. As an invited guest, I will be joining academics, activists, and artists to advance collaborative efforts. Like the United States, Colombia’s government allows for asbestos imports and use, exposing citizens to a lethal carcinogen that claims thousands of lives each year.

Over 15 years ago, my husband, Alan, was diagnosed with mesothelioma after being exposed to asbestos. From the pain of Alan’s disease, and from the suffering of so many around the world, Doug Larkin and I founded the Asbestos Disease Awareness Organization (ADAO), which grew from our own desire for a supportive community in regards to what we were both going through. We strengthened our reach by enabling victims, patients and families to turn anger into action and used the united voices of our specific public—people affected by asbestos—to shape international public opinion.

A will and desire to put an end to patients suffering, families grieving, and friends worrying serves as the fuel in our national and international fights. In our pursuit of spreading awareness and fighting for a ban on asbestos, I discovered the pain I felt was not unique. With nearly 40,000 Americans dying each year from asbestos-related illnesses, I was not alone. But not only does my pain match the suffering of others who have lost loved ones, but so does my drive. We’re a community- we are those damaged due to the loss of a loved one, and together we fight on.

Our fight has been collaborative — and it must continue. The United States and Colombia must ban asbestos and start putting family over industry. Colombian asbestos victims, like the U.S., have actively collaborated with nonprofits, labor, artists, lawmakers, and the media.

As a counterpart to learning from the Colombian experience, ADAO also has many things to share with the hard-working Colombian activists like Daniel Pineda Gonzalez, i.e., has been working hard from the loneliness of his personal pain due to the loss of his wife Ana Cecilia Niño. Felipe Rico Atara, head of the IZE Foundation, and film director, captured the powerful love story of Ana and Daniel in a strong and moving documentary called “Inextinguible” (“Inextinguishable”) which has been broadcast widely on Colombian TV and Media. Greenpeace Colombia has taught us original and forceful ways to protest (in front of Congress, in front of Eternit headquarters, etc) which always leaves a message that is loud and clear.

Visiting Colombia to be present at the “Asbestos: A Silent Killer?” Conference is an honor and  important opportunity for us to strengthen strategic ties with Latin America. It’s important to emphasize here that the Universidad Del Rosario, where our meeting will take place, deals more with issues of public policy than with academic information. This will help us to reach conclusions that are more related to actions than theory, and more related to the next concrete steps that we are currently requiring.

Our common struggle has not been easy, but we have encouraging examples like Brazil and Canada, where the long-awaited ban has taken place, and that is what this is all about.

Through pain and anger, this fight has taught me to strengthen collaborative efforts, leverage technology as there are no borders — no boundaries, and most of all, remain resilient, as we fight together for a global asbestos ban.