Skip to content
Home/Blog/“Now they found asbestos in crayons? Oh how I worry about my grandkids …” Guest Blog by Lou Williams

“Now they found asbestos in crayons? Oh how I worry about my grandkids …” Guest Blog by Lou Williams 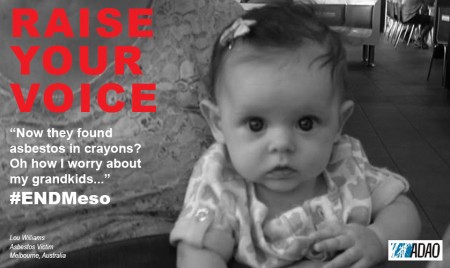 Lou Williams has been one of ADAO’s most dedicated supporters and inspirational mesothelioma warriors. Lou, diagnosed with mesothelioma, has been battling asbestos-related disease for years but has used this fight as a public platform to spread asbestos awareness and education. In her latest call for change Lou has joined the ADAO – Raise Your Voice #ENDMeso Campaign to stimulate asbestos policy reform. Lou joined the campaign after multiple tests in the United States and Australia found asbestos in children’s crayons.  ADAO is honored to share Lou’s guest blog – thank you Lou for your inspirational story and courageous dedication! ~ Linda

Lou has also started a petition to have Keytruda approved for the Pharmaceutical Benefits Scheme (PBS) for Mesothelioma.  As an unapproved drug, patients are forced to self-fund their treatment.  Please support this action by signing her petition.

As a global warrior living with Mesothelioma, I am very proud to be part of ADAO’s RAISE YOUR VOICE || #‎ENDMeso Campaign. I was inspired to join the campaign after I heard about the experiments that found asbestos in children’s crayon’s both in the United States and Australia. The photograph is a picture of my little one year old grandchild Meadow with my quote “Now they found asbestos in crayons? Oh how I worry about my grandkids …”

Below is a page on the Australian Government website, Asbestos Safety and Eradication Agency (ASEA). This page says that the crayons are considered to be a very low risk to children because the asbestos fibres would not be released during normal use or as a result of ingestion as the asbestos in the crayons is fully bound in the crayon wax.  These crayons therefore will not be recalled, however it is recommended that shop owners remove the crayons from their shelves. https://asbestossafety.gov.au/article/consumerretailer-alert-asbestos-identified-crayons-sold-within-australia

The Heads of Workplace Safety Authorities Imported Materials with Asbestos Working Group has issued an alert regarding the sale of crayons within Australia that have been found to contain trace amounts of asbestos. Trace amounts of asbestos have been detected in some brands of children’s crayons that have been imported into Australia. The crayon products in which asbestos has been identified are as follows:

Risk of exposure to asbestos fibres

The traces of asbestos that have been detected in the crayons are fully bound in the crayon wax. Studies have shown that as a result, asbestos fibres would not be released during normal use or as a result of ingestion. This is because the melting point of crayon wax is well above body temperature. Accordingly, these goods are considered to pose a very low risk to humans.

Despite the low risk, the Australian Government as well as state and territory governments are taking a precautionary and coordinated approach to this incident, through the HWSA Imported Materials with Asbestos Working Group. Officeworks has pulled crayons off its shelves as fears are raised about asbestos“