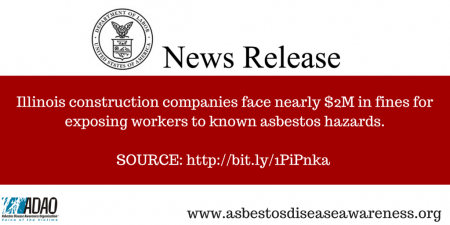 Workers have yet again unknowingly been exposed to deadly asbestos fibers due to the carelessness of employers. According to an investigation by the U.S Department of Labor Occupational Safety and Health Administration (OSHA), two Illinois companies Kehrer Brothers Construction and a Kehrer-affiliated company, D7 Roofing, knowingly and willingly exposed at least eight workers to asbestos in the renovation of a former Okawville school. As consequence, Joseph Kehrer and Kehrer Brothers face $1,792,000 in penalties and OSHA placed Kehrer Brothers in its Severe Violator Enforcement Program.

Kehrer and supervisors of the Albers, Illinois-based company failed to inform, provide protective equipment, create a decontamination area, and use appropriate work methods to minimize asbestos exposures for the employees, several of whom only speak Spanish.

Not only were the workers dangerously exposed to the hazards of asbestos fibers, including a heightened risk of cancer, but the non-English speaking workers had an even lessened ability to know what kind of work they were getting into due to the language barrier. In fact, since taking on a riskier job such as a construction job does not necessarily require significant English ability and longtime residence in the United States, the Population Reference Bureau noted that Hispanic workers are disproportionately exposed to dangerous jobs.

Assistant Secretary of Labor Dr. David Michaels told the Associated Press, “This case stands out because of the outrageous behavior of Joseph Kehrer. They spoke no English. He drove them to jobs. He set up a housing camp for them. They were at his mercy.”

Asbestos-caused diseases claim up to 15,000 lives a year. We must ensure that the public, especially those more likely to take on work in industries where they could be exposed to asbestos, are properly educated about the risks. Under the Occupational Safety and Health Act of 1970, employers are responsible for providing safe and healthful workplaces for their employees.

Yet, employers continually attempt to get away with leaving unaware workers victim to asbestos. Therefore, the most impactful way to prevent asbestos disease and exposure is to raise awareness, encourage compliance, and strengthen enforcement. We must increase the number of informational resources readily available to the public in both English and Spanish about high-risk occupations, early warning symptoms, and prevention of asbestos disease after exposure to the fibers.

As we say at ADAO, “Hear Asbestos. Think Prevention.”