“Our Journey with Mesothelioma” – Chip’s Story

This week, we would like to honor the story of Chip, as shared by his widow, Shelby, who is a part of our ADAO family. 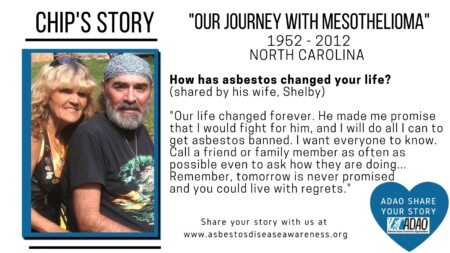 On December 22nd 2011, Chip decided it was time to get married. We had been together nearly 4 years. After 2 weeks, he became ill, with what they thought was bronchitis. As time passed, he was no better. They did a X-ray, which showed fluid on his right lung. They drained almost 9 liters off, but there was still more that only surgery could remove. The time came for a biopsy that we dreaded. As I sat in the room with the Doctor as Chip was in recovery, he handed me the worst news ever. It was mesothelioma.

Next, we went through chemo, which did no good. Then, on June 11th 2012, it was surgery time to remove his right lung. This took 6 1/2 hours. After surgery came radiation, which we were so afraid of. I watched during radiation how it seemed to zap the life out of a once strong person.

The news about his rare form of cancer crippled him before it had a real impact on him physically. I couldn’t believe how drastically he changed in the remaining months of his life. It was heart breaking to see him affected by the mesothelioma pain and its symptoms. Here was this strong guy built like a brick house, and then this deadly cancer caught him in the middle of a great life and destroyed him. We both knew we were on this journey alone and we talked and he told me things he wanted me to do – his wishes. I had a birthday party for him on October 6th 2012, as I knew he would never see another one. He was so happy that day like a kid at Christmas. It made me happy to see the smiles as he opened each gift and struggled just to blow out the candles.

On Oct 17th, Chip got so bad and struggling to breathe that I had to call an ambulance even though he said no. He was taken to the hospital and within 2 hours, he had to have a breathing tube. I saw him open his eyes only one time and that was when I told him I was there and he reached for my hand. He then closed his eyes like he was at peace. On October the 20th, he went in cardiac arrest.

I hope this short story helps others, knowing what happened to us. Our life changed forever. He made me promise that I would fight for him, and I will do all I can to get asbestos banned. I want everyone to know. Call a friend or family member as often as possible even to ask how they are doing. Put off your busy schedule. It takes only a minute to call or a few minutes to visit someone that is ill. Remember, tomorrow is never promised and you could live with regrets.