Skip to content
Home/Blog/Our Story Could Become Your Story: Evacuations at Capitol Hill During Asbestos Scare

Our Story Could Become Your Story: Evacuations at Capitol Hill During Asbestos Scare 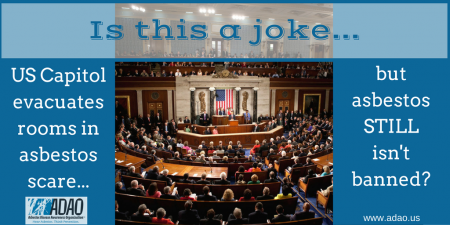 A possible asbestos scare prompted evacuations in the U.S. Senate press gallery and other rooms in the U.S. Capitol, the Associated Press reported Thursday.

Workers discovered a broken air duct above the 3rd floor press gallery which has prompted an investigation into the possibility of asbestos exposure, according to officials from the Architect of the Capitol’s office.

The air was been shut off, the duct repaired, and air quality tests started, according to architect’s office officials. They said don’t know when the duct broke.

Officials said the Senate chamber, which is adjacent to the press gallery, is unaffected.

Of course, this isn’t the first time Capitol Hill has faced an asbestos scare. The House side of the Capitol was closed in 2014 for exposure risks after asbestos abatement work.

This is another excellent opportunity to remind ourselves of the omnipresent risk asbestos continues to pose to Americans, even the most powerful among us. With a new chemical safety law that paves the way for an asbestos ban, ADAO urges the Environmental Protection Agency (EPA) to prioritize asbestos in 2016 top 10 chemicals for risk evaluation and regulatory action.

Enough. The EPA must take bold steps forward toward now to end the asbestos man-made disaster.