The Asbestos Awareness Disease Organization (ADAO) applauds Philadelphia teacher Lea DiRusso for appearing on Good Morning America on November 21 to discuss her diagnosis of asbestos-caused mesothelioma. DiRusso bravely shared her story to more than 3.5 million viewers about how she believes she got the disease and what action she plans to take against those she holds responsible. 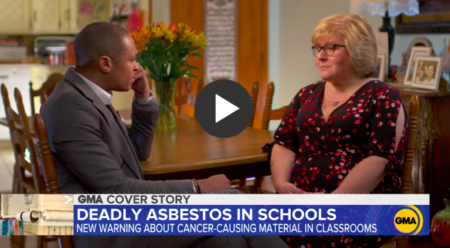 DiRusso was diagnosed with malignant mesothelioma in August, after a 30 year teaching career in Philadelphia. Two different schools that she worked at have both tested positive for asbestos. On Good Morning America, she explained that she was not told there was a toxic substance in the school and that it was “in my midst, two feet from my head, every day, all day.” She had to give up teaching following her diagnosis.

“I didn’t know it was my last year. I just feel like I didn’t get to end it the way I wanted to end it,” DiRusso said on Good Morning America.

“I don’t have a future anymore. I planned on spending my golden years with someone I just married a few years ago and it doesn’t look like that’s going to happen,” DiRusso continued. “I feel like I have tomorrow, that’s about it.”

The Philadelphia School District is currently trying to deal with the asbestos that has been found in many of its buildings. It was previously reported that 175 schools—the majority of Philadelphia School District buildings— have asbestos and need remediation. In October it was reported that two schools in the city were closed “indefinitely” due to asbestos that was found during renovations. District superintendent Dr. William Hite announced that he has ordered a visual inspection of every building to be completed by December 20th of this year.

DiRusso plans to file a mesothelioma lawsuit against the Philadelphia School District in response to her diagnosis, accusing the district of negligence in exposing her, her colleagues and her students to asbestos.

“If I make a classroom safe for my students, I expect the school district to make all schools safe for students and staff,” DiRusso said.

We thank DiRusso for speaking out against the danger that school children and educators around the world are facing. Despite the fact that nearly 40,000 Americans die annually from preventable asbestos caused diseases, imports and use continue. Just last year, the chlor-alkali industry imported 750 metric tons of deadly raw chrysotile asbestos from Brazil and Russia. According to EPA’s Office of Inspector General (OIG), “substantial amounts of asbestos, particularly in sprayed form, have been used in school buildings, especially from 1946 through 1972. More than 50 million students from kindergarten through 12th grade attend more than 131,000 public and private school facilities in the United States, and more than 7 million teachers and others work in those schools.”

We wish DiRusso all the best in her fight against the school district and mesothelioma.