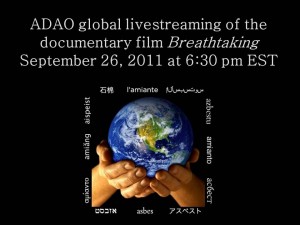 ADAO to Livestream Breathtaking: A Personal Investigation into the Continued Use of Asbestos

Redondo Beach, CA … July 23, 2011 — The Asbestos Disease Awareness Organization (ADAO,) which combines education, advocacy, and community to provide a unified voice for asbestos victims, today announced that it will be livestreaming Breathtaking on September 26th. The documentary, directed by Ontario filmmaker Kathleen Mullen, is “a personal investigation into the continued use of asbestos” and details her father’s tragic death due to exposure to asbestos from Canadian mining.

Breathtaking addresses the asbestos industry through a moving and personal investigation into the death of Mullen’s father, and the baffling present-day use, public mining, and incessant export of asbestos in spite of decades of scientific evidence that asbestos kills people.  Commercially mined since the Industrial Revolution, asbestos was nicknamed the ‘magic mineral’ for its fabric-like, and fire retardant properties and has been used in everything from brake pads to oven mitts. Although it has been discovered to be carcinogenic, and asbestos use has been banned in many countries and limited in others. However, Canada, Russia and several other countries, still mine asbestos and export it for use in developing nations.

Mullen uses heartbreaking clips of her dying father’s legal testimony, together with family photos, and home movies to take the audience on an investigative journey.  From her family home in British Columbia to Quebec, India and Detroit, Mullen paints a global, yet still personal picture of the many lives affected by the continued use of asbestos.

“As I began Breathtaking, everyone to whom I mentioned I was making the film responded with a personal story of their own,” Mullen says. “I soon realized that this story was a lot bigger than just my own family’s grief.”

The Asbestos Disease Awareness Organization (ADAO) recognizes the global and negative impact of the Canadian asbestos industry and has partnered with Mullen to hold a first-ever, international livestreaming of Breathtaking on September 26th, 2011 at 6:30 pm EST from the ADAO website.

The 45 minute screening will begin with a short introduction from Mullen and conclude with a thirty minute question and answer session via Twitter with the filmmaker and ADAO President and Co-Founder, Linda Reinstein.

“ADAO is thrilled to be able to bring this critical issue to the forefront through the incredible film, Breathtaking. It is through the new avenues of digital technology and social media that we are seeing awareness about asbestos hazards expand rapidly around the globe,” said Reinstein about the livestreaming event.