Washington, DC––Linda Reinstein, president of the Asbestos Disease Awareness Organization, the largest asbestos-victim advocacy organization, released the following statement today in response to the EPA’s publication of a significant new use rule (SNUR) for asbestos: 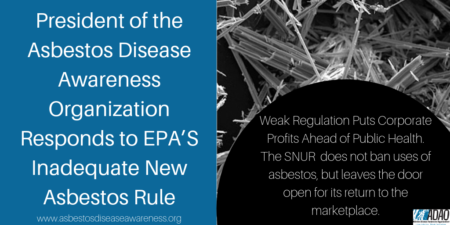 “The Environmental Protection Agency’s (EPA) significant new use rule (SNUR) for asbestos is deeply disappointing, especially after last week’s comments from EPA Administrator Wheeler who testified he was committed to banning ongoing uses of asbestos.

Asbestos is a known carcinogen that claims the lives of nearly 40,000 Americans every year. This toothless regulation requires companies to seek approval from EPA to resume manufacturing, importing, and processing of asbestos for 15 obsolete uses. It does not ban these uses, but leaves the door open to their return to the marketplace. To think that any company would willingly attempt to resurrect these 15 obsolete asbestos uses is ludicrous. That EPA would enable it is unconscionable.

Meanwhile, this rule fails to address the continuing imports of raw asbestos into the United States, effectively giving the Chlor-Alkali industry a free pass to continue to import and use hundreds of metric tons of the deadly mineral.  It also ignores legacy asbestos, which remains an ever present threat in our homes, workplaces, and schools.

More than 60 nations around the world have put public health before private profits and banned asbestos. Americans deserve the same from our government. A comprehensive solution to the threat of asbestos is long overdue and that is what the bicameral Alan Reinstein Ban Asbestos Now Act of 2019 offers. Congress must immediately move this lifesaving legislation forward to protect public health as the EPA has shown they are unwilling to do.”