We had nearly 100 attendees spanning from journalists, to public health stakeholders, advocates, and our 12 speakers who shared insightful comments about the dangerous flaws in EPA’s draft risk evaluation for asbestos. For easy watching and sharing, the press conference video is below. 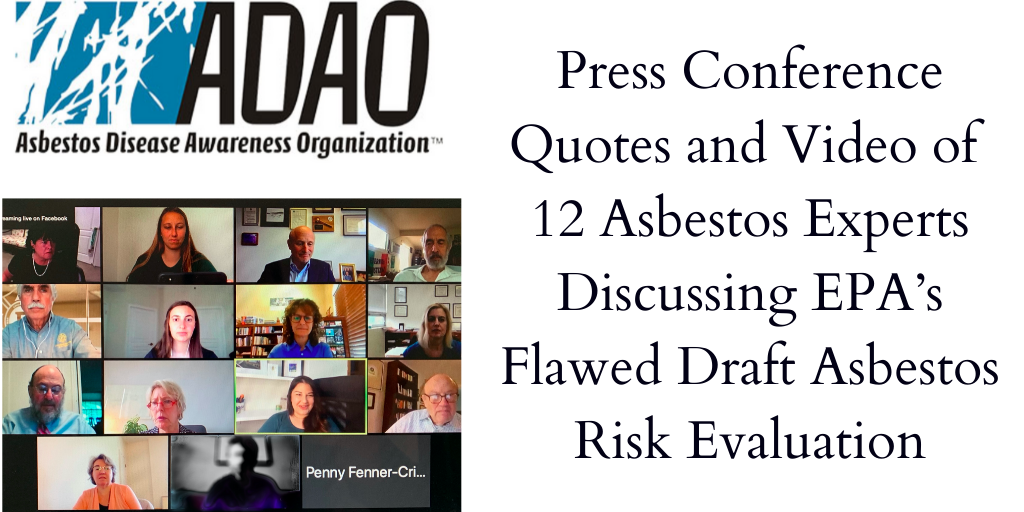 InsideEPA wrote an article entitled, “Critics renew call for Congress to ban asbestos after EPA review” about our press conference.

Since 1976, asbestos has been the poster child for the need to reform the Toxic Substances Control Act (TSCA). Initially, we breathed a sigh of relief in 2016 when the Lautenberg Chemical Safety Act (LCSA) was signed into law and EPA selected asbestos for one of its first risk evaluations. However, EPA’s actions have been disappointing, to say the least. Implementation of the new TSCA for asbestos has been a frustrating struggle. We are not alone in thinking this: The EPA’s own scientists and civil servants have expressed deep concerns with the agency’s approach, as reported last year by the New York Times.

As we approach the four year anniversary of the Lautenberg Chemical Safety Act, we are reminded that it was a legislative accomplishment where asbestos was used to illustrate the profound need for a stronger law. However, it is also a reminder of years of disappointment, as we are no closer to banning asbestos than when the law passed.

Although there are many dangerous and deadly problems in the industry friendly Draft Risk Evaluation, our twelve experts focused on these main points:

Though the EPA deemed most of the conditions of use of asbestos to present an “unreasonable risk,” it is only because time and time again, the numbers have proven that asbestos is a killer. The EPA had no choice but to come to this conclusion. However, they have a choice now to fix the glaring issues in the draft risk evaluation.

Therefore, the EPA needs to take our concerns into consideration before moving forward. And more importantly, Congress needs to do something they should have done 30 years ago: Ban asbestos imports and use once and for all.

The 12 quotes below from the speakers gives you an insight into the inaccurate EPA draft risk evaluation for asbestos.

Barry Castleman, ScD: “The EPA Draft fails to account for the maximal exposures that arise in the life cycle of some asbestos products. It is important to not only account for the fact that such high exposures can occur but that they continue, notwithstanding government efforts to warn and regulate such exposures.”

Penny Fenner-Crisp, PhD, Environmental Protection Network: “This draft risk evaluation concludes that every condition of use evaluated poses an unreasonable risk to public health, in both the occupational (workers and occupational non-users (ONUs)) and consumer (users and bystanders) setting. It is time to proceed directly to rule making with a proposal to BAN the importation, manufacture, processing, distribution and use of asbestos for all commercial and consumer uses in the U.S. on an expedited timeline. Over 30 years have passed since the 1989 rule failed, during which alternatives could have been developed. There is no excuse for delaying action any further.”

Arthur Frank, MD, PhD: “The scope of the EPA assessment should not be limited to chrysotile alone, since there are legitimate reasons for also considering amphiboles. Workers and the general public are both still regularly exposed to amphiboles.”

Liz Hitchcock, Safer Chemicals, Healthy Families: “Unfortunately, it seems that EPA is leaving the shiny new and improved tools they got in reformed TSCA out in the rain to rust. Asbestos remains in the built environment where it continues to pose a threat to public health to this day.”

“EPA should set the stage for a comprehensive asbestos ban by including all uses in its risk evaluation, including legacy uses where we live and work across the US.”

Brent Kynoch, Environmental Information Association: “EPA’s decision to make a risk evaluation and ultimately a risk assessment based only on mortality rates relating to asbestos exposure and to not include incidences of cancer severely underestimates the risk associated with asbestos exposure. By not considering legacy exposures as an integral part of the current risk evaluation, it has narrowed the modeling and by EPA’s own admission, has undercounted both exposure and likely the mortality rates.”

Richard Lemen, MSPH, PhD: “In limiting the Draft Risk Evaluation to do a chrysotile-specific risk analysis is not realistic since, by doing so it screened out all studies in which exposures were not solely to chrysotile, ending up with only two studies to calculate the IUR.”

“In the United States, recent estimates indicate that there are still nearly 40,000 deaths occurring each year from exposures to asbestos, much of it as a result of legacy asbestos.”

Jacqueline Moline, MD, MSc: “Asbestos in talc is linked to ovarian cancer yet EPA has excluded all asbestos-related malignancies from the evaluation except for lung cancer and mesothelioma. In addition, the asbestos found in talc is a mixture of fiber types but EPA only examines risks from chrysotile in the mistaken belief that this is the only fiber in current products. If asbestos in talc is added to the draft evaluation, EPA would need to address both of these limitations so that talc-related risks could be fully assessed.”

Celeste Monforton, MPH, DrPH, American Public Health Association: “The agency’s draft risk evaluation is incomplete and its assumptions inappropriate. It fails to address, for example, the risk created by the millions of metric tons of asbestos already in use —-This means ignoring the risk to communities where families live in substandard housing and children going to school where cities have disinvested in public buildings. This risk is increasing because of extreme weather events brought on by climate change.”

Patrick Morrison, International Association of Firefighters: “we believe that the EPA should evaluate fire fighters as a susceptible subpopulation, and evaluate legacy exposure in their chemical risk evaluation process. Firefighters face a high risk of asbestos exposure, because asbestos becomes airborne when disturbed or damaged by fire.”

Christine Oliver, MD, MPH, MS, FACPM: “The EPA’s singular focus on mortality vs. incidence underestimates the health risk of asbestos for at least two important reasons. First, incident asbestos-related disease is far more prevalent than asbestos-related mortality in developed countries, particularly with regard to nonmalignant diseases such as asbestosis. Second, the EPA uses outdated survival data for lung cancer and malignant mesothelioma from 1975-2010 to characterize survival from these two cancers as short-term following diagnosis.”

Linda Reinstein: “The facts are irrefutable. Each year, nearly 40,000 Americans die from preventable asbestos-related diseases. Nearly 70 countries have banned asbestos, yet the United States is leading the race to the bottom in its inability to act. . Our government has failed time and time again to ban this known carcinogen. Since 1989, we have consumed nearly 400,000 metric tons of asbestos and buried one million Americans.”

Robert Sussman, JD: “Asbestos is not any chemical but a uniquely hazardous substance that has taken the lives of over a million Americans. There is a compelling need to inform the public about this enormous threat to public health, but the draft EPA evaluation ignores critical aspects of asbestos exposure, disregards known health effects and greatly understates risks.”