Washington, DC —September 26, 2018—The Asbestos Disease Awareness Organization (ADAO), an independent nonprofit dedicated to preventing asbestos exposure through education, advocacy, and community work, today announced that it is submitting a petition to demand the EPA give Americans better information about the deadly asbestos being brought into the U.S. This “Right to Know” petition, submitted to Acting EPA Administrator Andrew Wheeler by ADAO and five other leading environmental and public health organizations, calls on the EPA to do its job and protect Americans from this toxic substance. 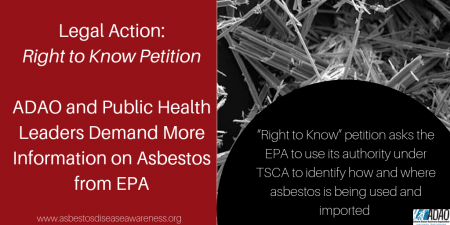 Specifically, the Right to Know petition asks the EPA to use its authority under the Toxic Substances Control Act (TSCA) to require importers and users of asbestos and asbestos-containing products to report on their activities and disclose these reports to the public. ADAO, together with other petitioners including American Public Health Association (APHA), Center for Environmental Health (CEH), Environmental Working Group (EWG), Environmental Health Strategies Center (EHSC) and Safer Chemicals, Healthy Families (SCHF) will deliver the petition in a letter to Acting EPA Administrator Andrew Wheeler today. The petition is based on section 21 of TSCA, which enables citizens to petition EPA to require industry to file reports under the law and requires EPA to respond in 90 days. If EPA ignores or rejects the petition, the petitioners can file suit to compel the Agency to act.

Last year, ADAO informed EPA that a major asbestos importer and user, Occidental Chemical, had not been filing reports with the agency. Instead of demanding that the company report, EPA said that asbestos was exempt from its Chemical Data Reporting (CDR) rule, its major tool for collecting data on chemicals. Linda Reinstein, ADAO President and CEO stated, “We are calling on EPA to close this shocking loophole in its regulations so that the agency’s risk assessors can do their jobs properly, and workers and the general public can determine whether they are being exposed to asbestos and can protect themselves from harm. Allowing more than 300 hundred metric tons of asbestos to be imported without any notification to the agency and the public shows a reckless disregard for public health by the Trump EPA.”

The petition urges EPA to undertake expedited rule-making to subject asbestos to the CDR. It also asks that the revised rule trigger CDR reporting on asbestos immediately, including imports of asbestos-containing articles and those contaminated by asbestos, and require reporting by processors of raw asbestos and asbestos-containing products. The petition asks that all reports be disclosed without regard to claims of confidential business information (CBI) so that the public is informed of where and how this dangerous substance is being used.

Bob Sussman, a senior official at EPA in the Clinton and Obama administrations and counsel to the ADAO, said that: “Under the recently strengthened law, EPA is doing the first risk evaluation of asbestos in 30 years and it is long overdue. A sound risk evaluation for asbestos under TSCA must be based on detailed and accurate information about how and where asbestos is being used and in what amounts. But EPA now has only sketchy and incomplete information on this subject and admits that it cannot quantify the volume of asbestos imports or the amount of asbestos to which consumers are exposed. This is because EPA has failed to take the simple and obvious step of requiring reports from the companies that are importing and using asbestos.”

Dr. Raja Flores, Chair of the Department of Thoracic Surgery at the Mount Sinai School of Medicine, said that “as a physician treating patients with asbestos disease, I cannot overemphasize the importance of preventing exposure to asbestos because even low levels of this dangerous substance can cause lung disease and death. If we do not know where asbestos is being used and who is exposed, the vital work of prevention is impossible.”

Asbestos is among the most dangerous chemicals ever produced, with expert bodies agreeing that there is no safe level of exposure. Recent research indicates that nearly 40,000 asbestos-related deaths occur in the US each year. Yet importation and use of asbestos are legal in the US with limited exceptions.

“This petition is another critical step in our united efforts to end the tragedy of asbestos. As our most recent video demonstrates, asbestos is a killer that thrives on political ineptitude,” concluded Reinstein. “While we work to ban asbestos, Americans have the right to know who imports and uses asbestos in their workplace and community.”

The Asbestos Disease Awareness Organization (ADAO) was founded by asbestos victims and their families in 2004. ADAO is the largest non-profit in the U.S. dedicated to providing asbestos victims and concerned citizens with a united voice through our education, advocacy, and community initiatives. ADAO seeks to raise public awareness about the dangers of asbestos exposure, advocate for an asbestos ban, and protect asbestos victims’ civil rights. For more information, visit www.asbestosdiseaseawareness.org