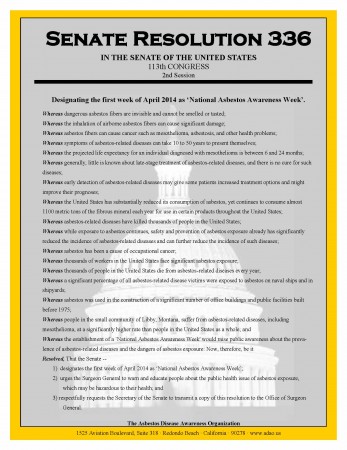 “Senator Baucus’ legacy of leadership as an advocate for asbestos awareness and education is unmatched,” stated Linda Reinstein, President and Co-Founder of the Asbestos Disease Awareness Organization. “This resolution establishing the tenth annual ‘National Asbestos Awareness Week’ is a fitting way for us to bid him farewell as he exits his position as a beloved U.S. Senator for the State of Montana. As a mesothelioma widow, I am forever indebted to him for playing such an important role in shaping a new era of asbestos awareness and advocacy for victims and their families.”

Despite its known dangers, there is still no global ban on asbestos, and it continues to claim lives. Exposure to asbestos, a human carcinogen, can cause mesothelioma, lung, gastrointestinal, laryngeal, and ovarian cancers; as well as non-malignant lung and pleural disorders. The World Health Organization estimates that 107,000 workers around the world will die every year of an asbestos-related disease, equaling 300 deaths per day.

“With the people of Libby in mind, I am honored to sponsor the Asbestos Awareness Week resolution. Although we can’t right the tragic wrong that took place in Libby, Asbestos Awareness Week makes sure folks have the resources and tools they need to keep the tragedy of Libby from happening again,” said Baucus, who was instrumental in urging the EPA to declare its first ever public health emergency in Libby, Montana. “I’m proud of the Asbestos Disease Awareness Organization and folks across Montana for the work they have done to raise awareness and fight for the victims of asbestos exposure.”

“On behalf of ADAO, I would also like to thank Senator Barbara Boxer (D-CA), Senator Richard Durbin (D-IL), Senator Johnny Isakson (R-GA), Senator Patty Murray (D-WA), Senator Harry Reid (D-NV), and Senator Jon Tester (D-MT) for their support of Resolution 336,” stated Ms. Reinstein. “We are delighted by the bi-partisan support and rapid passage of this resolution, so that we can again build a continuing legacy of hope that is documented at this same time each year.”

ADAO will hold its Tenth Annual International Asbestos Awareness Conference on April 4 – 6, 2014, at the Crystal Gateway Marriott in Arlington, VA. More than 30 renowned medical experts and asbestos victims from ten countries will speak on the latest advancements in asbestos disease prevention, treatment for mesothelioma and other asbestos-caused diseases, and global ban asbestos advocacy.

To register for ADAO’s 2014 conference, visit the following link: http://bit.ly/18UUGWH