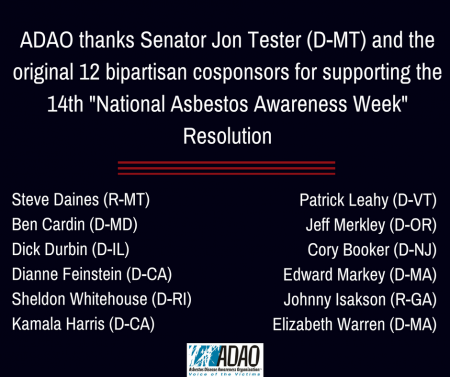 “We are enormously thankful to Senator Tester and the 12 cosponsors for introducing the 14th ‘National Asbestos Awareness Week’. Each year, up to 15,000 Americans die from preventable asbestos-caused diseases while imports and use continue. Undoubtedly, the resolution’s momentum and U.S. Surgeon General’s asbestos warning will raise awareness and save lives.

Now, more than ever, it’s crucial to raise asbestos awareness to ensure the American public understands that this is not an issue of the past. New data from the Centers for Disease Control and Prevention (CDC) reports that asbestos-caused deaths are on the rise in the U.S., despite significantly decreased use since peak consumption in the 1970s. Furthermore, the study reports that malignant mesothelioma deaths among patients aged 25-44 continue, indicating current and continued occupational, environmental, and secondary exposure risk. Asbestos has even been found recently in makeup and other consumer products; its import and usage continue.

As the EPA begins its risk evaluation of asbestos under the Toxic Substances Control Act (TSCA), it is paramount that the Senate underscore what we’ve long known about asbestos — that it poses undue risk to human health and the environment and must be banned, as there is no safe or controlled use. This has been the sentiment of the last 13 Senate Asbestos Awareness Resolutions as well as five warnings from the U.S. Surgeon General’s office; and former President Barack Obama became the first sitting president to acknowledge asbestos as a deadly carcinogen.”

Exposure to asbestos, a human carcinogen, can cause mesothelioma, lung, gastrointestinal, colorectal, laryngeal, and ovarian cancers; as well as non-malignant lung and pleural disorders. The Global Burden of Disease, Injuries, and Risk Factor Study of 2013 published in the renowned Lancet Medical Journal reported that 194,000 people globally die from asbestos-caused diseases every year, equaling more than 500 deaths per day.

As the World Health Organization states, “Exposure to asbestos, including chrysotile, causes cancer of the lung, larynx, and ovaries, and also mesothelioma (a cancer of the pleural and peritoneal linings). Asbestos exposure is also responsible for other diseases such as asbestosis (fibrosis of the lungs), and plaques, thickening and effusion in the pleura.”