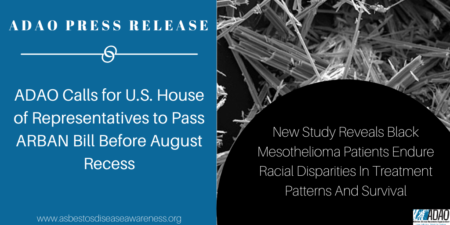 Washington, D.C. — The Asbestos Disease Awareness Organization (ADAO) is calling on the U.S. House of Representatives to end the delay to vote on and pass the Alan Reinstein Ban Asbestos Now Act (ARBAN) and send the legislation over to their colleagues in the U.S. Senate immediately.

As the novel coronavirus continues to devastate families across the country, asbestos victims have been left extremely vulnerable. Tens of thousands of patients are at a heightened risk from COVID-19 as a result of disease-weakened immune systems and face limited access to crucial treatments, overrun hospitals and a decreased ability to pay for treatments due to record job losses. Each year, nearly 40,000 Americans die from asbestos-related diseases.

“I have seen the pain, suffering, and death caused from asbestos exposure firsthand from the operating room,” said Raja Flores, MD, Chairman for the Department of Thoracic Surgery at Mt. Sinai Medical Center and ADAO Science Advisory Board Member. “For years, I’ve spoken to Congressional Members and staffers and told them the simple truth: these deaths were preventable. Congress can do more with a pen to save lives than I can with a scalpel. We need to pass ARBAN now.”

This week ADAO Co-Founder Linda Reinstein co-authored an op-ed for the Montana Standard with the support of the state’s senators, Jon Tester and Steve Daines, urging Congress to take action and ban asbestos once and for all. Senator Daines (R-MT) has made clear that once ARBAN passes the House, he plans to partner with Oregon Senator Jeff Merkley (D-OR) and keep the bill on track to pass in the Senate. In a time of unprecedented divisiveness in American politics, this level of bipartisan collaboration should be applauded in the interest of public health.

“If there’s one thing we’ve learned from the devastation caused by COVID-19 and racial inequities, it’s that there is a human cost to inaction,” said Linda Reinstein, Co-founder of the Asbestos Disease Awareness Organization. “Suffering and dying from preventable asbestos-caused diseases is reprehensible. Americans can’t afford to wait for the Environmental Protection Agency to do their job when failure is imminent. It’s time for the House to pass the bipartisan ARBAN legislation finally banning all uses of asbestos without exemptions or loopholes.”

Once passed, ARBAN would ban the manufacturing, processing, use, and distribution of asbestos within a year of enactment, require a study of legacy asbestos in structures, and establish a new chemical data reporting program. There continues to be an overwhelming consensus that asbestos is a carcinogen with no safe or controlled amount of use.