Calls for Congressional Action to Protect Workers’ Safety and Health

Los Angeles, CA.  – November 13, 2012 – The Asbestos Disease Awareness Organization (ADAO) has confirmed that workers in Houston, Texas were exposed to asbestos while repairing the city’s water mains in 2011. The Scientific Analytical Institute (SAI) determined that the pipe was composed of 35% asbestos (25% chrysotile asbestos and 10% crocidolite asbestos). According to the workers, they were not informed that the pipe contained asbestos nor given personal protective equipment appropriate for handling asbestos. The workers told ADAO that they were instructed to cut the pipe using a power saw and sledge hammer, which released asbestos into the air.

“It is inexcusable that workers continue to be exposed to asbestos, a known human carcinogen,” said Linda Reinstein, Co-Founder of ADAO. “In order to protect workers’ safety and health, the Occupational Safety and Health Administration (OSHA) has developed detailed standards for handling asbestos. Nonetheless, some contractors continue to knowingly expose their workers to asbestos without complying with these standards. ADAO calls on Congress to require that OSHA’s asbestos standards are enforced so that workers’ safety and health are never compromised.”

Beginning in the 1960s and continuing into the 1980s, cities throughout the U.S. installed millions of miles of asbestos-cement pipes. As these pipes wear over time, they rupture and require repair.

“Cities must ensure that asbestos-cement pipe is handled with utmost caution,” said Dr. Celeste Monforton, senior research associate at George Washington University’s School of Public Health and Health Services. “The serious health harm caused by asbestos exposure is well-known. I was appalled to hear how this known carcinogen was handled in such a frivolous manner in the City of Houston.” 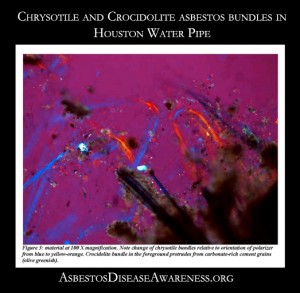 ADAO calls on Congress and the President to prohibit further U.S. importation of asbestos and protect workers’ safety and health by requiring that U.S. contractors adhere to OSHA’s standards for handling asbestos.

ADAO urges the City of Houston to (1) identify and make public the location of all water mains containing asbestos-cement pipe; (2) adopt OSHA’s standards of practice for handling asbestos and ensure that all city-contracted projects comply with them; and (3) identify and notify all workers engaged in water main repairs of their potential exposure to asbestos and implement a program to provide long-term medical screening and care for all of them.

In addition to being exposed to asbestos, the workers did not receive wages for their repair work for over two months. ADAO joins the Fe y Justicia Worker Center in calling on the City of Houston to pass an ordinance to ensure that the City conducts a full review of companies’ wage and hour records, as well as their safety and health records, before issuing permits, licenses, or contracts.

Asbestos Disease Awareness Organization (ADAO) was founded by asbestos victims and their families in 2004. ADAO seeks to give asbestos victims and concerned citizens a united voice to raise public awareness about the dangers of asbestos exposure. ADAO is an independent global organization dedicated to preventing asbestos-related diseases through education, advocacy, and community. For more information, visit www.asbestosdiseaseawareness.org.