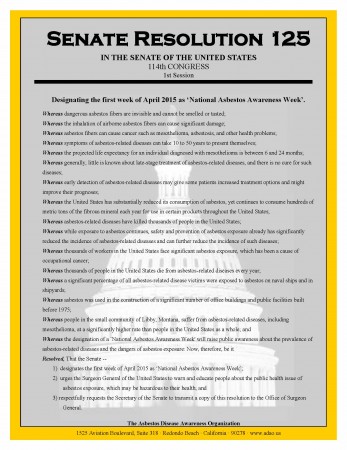 Despite its known dangers, asbestos remains legal and lethal in the USA and imports continue. Exposure to asbestos can cause mesothelioma, lung, gastrointestinal, laryngeal, and ovarian cancers; as well as non-malignant lung and pleural disorders. The World Health Organization estimates that 107,000 workers around the world will die every year of an asbestos-related disease, equaling 300 deaths per day.

Linda Reinstein, President and Co-Founder of ADAO, expressed her gratitude commenting: “On behalf of ADAO, I would like to thank Senator Markey, Co-Sponsors, and full Senate for unanimously passing the 11th Annual ‘National Asbestos Awareness Week’ Resolution. We are extremely pleased to have such strong bipartisan backing of this critical resolution once again so that we can continue our concerted efforts to educate the public on the dangers of asbestos and build a legacy of hope for victims of asbestos each year.” She continued, “Most Americans can’t identify asbestos or manage the risk associated with repairs, renovation, construction, or disasters. The powerful 15 facts outlined in the resolution underscore the dangers of asbestos. Since 1900, the USA has consumed 31 million metric tons of asbestos, which has caused one of the largest man-made disasters. Each year, 10,000 Americans die from preventable asbestos-caused diseases. We are hopeful and encouraged by efforts to reform the outdated Toxic Substances Control Act (TSCA) from 1976 that has failed to ban asbestos and protect Americans from nearly 84,000 chemicals that have been grandfathered into commerce.”

“My decision to lead the sponsorship of this resolution was an easy one to make as I firmly believe that the key to ending asbestos related deaths is education and prevention and I applaud ADAO for its work to help further this important goal,” stated Senator Edward Markey. “The establishment of the Eleventh Annual Asbestos Awareness Week comes on the heels of my co-introduction, with Senator Barbara Boxer, of another important piece of legislation – the Alan Reinstein and Trevor Schaefer Toxic Chemical Protection Act, S. 725 – which seeks to protect children and communities from the dangers of toxic chemicals and specifically calls for a ban on asbestos. I remain enormously encouraged by the bipartisan efforts taking place to end exposures to toxic substances like asbestos.”

Senator Barbara Boxer said:  “Asbestos is one of the most dangerous substances known to humankind – it takes 10,000 lives a year.  National Asbestos Awareness Week is an important reminder of why we need to fight to ensure that our families and children are protected from this lethal hazard.  That is why Senator Markey and I recently introduced S. 725, the Alan Reinstein and Trevor Schaefer Toxic Chemical Protection Act, which specifically addresses the threat posed by asbestos.”

ADAO has worked with members of the Senate since its founding in 2004 to unanimously pass annual asbestos awareness resolutions and has secured three U.S. Surgeon General asbestos statements in 2009, 2013, and 2014 educating Americans about the dangers of asbestos and steps to prevent exposure. A copy of the resolution can be found here.

ADAO will hold its 11th Annual Asbestos Awareness Conference on April 17 – 19, 2015, at the Crystal Gateway Marriott in Arlington, VA. More than 40 renowned medical experts and asbestos victims from ten countries will speak on the latest advancements in asbestos disease prevention, treatment for mesothelioma and other asbestos-caused diseases, and global ban asbestos advocacy.  To register for ADAO’s 2015 conference, click here.

Whereas dangerous asbestos fibers are invisible and cannot be smelled or tasted;

Whereas the inhalation of airborne asbestos fibers can cause significant damage;

Whereas asbestos fibers can cause cancer such as mesothelioma, asbestosis, and other health problems;

Whereas symptoms of asbestos-related diseases can take 10 to 50 years to present themselves;

Whereas the projected life expectancy for an individual diagnosed with mesothelioma is between 6 and 24 months;

Whereas generally, little is known about late-stage treatment of asbestos-related diseases, and there is no cure for such diseases;

Whereas early detection of asbestos-related diseases may give some patients increased treatment options and might improve their prognoses;

Whereas the United States has substantially reduced its consumption of asbestos, yet continues to consume hundreds of metric tons of the fibrous mineral each year for use in certain products throughout the United States;

Whereas asbestos-related diseases have killed thousands of people in the United States;

Whereas thousands of workers in the United States face significant asbestos exposure, which has been a cause of occupational cancer;

Whereas thousands of people in the United States die from asbestos-related diseases every year;

Whereas a significant percentage of all asbestos-related disease victims were exposed to asbestos on naval ships and in shipyards;

Whereas asbestos was used in the construction of a significant number of office buildings and public facilities built before 1975;

Whereas people in the small community of Libby, Montana, suffer from asbestos-related diseases, including mesothelioma, at a significantly higher rate than people in the United States as a whole; and

Whereas the designation of a “National Asbestos Awareness Week” will raise public awareness about the prevalence of asbestos-related diseases and the dangers of asbestos exposure: Now, therefore, be it

Resolved, That the Senate—

(2) urges the Surgeon General of the United States to warn and educate people about the public health issue of asbestos exposure, which may be hazardous to their health; and

(3) respectfully requests that the Secretary of the Senate transmit a copy of this resolution to the Office of the Surgeon General.