The report reveals that the chlor-alkali industry, the only remaining industry to import raw asbestos in the United States, now receives its asbestos solely from Russia. 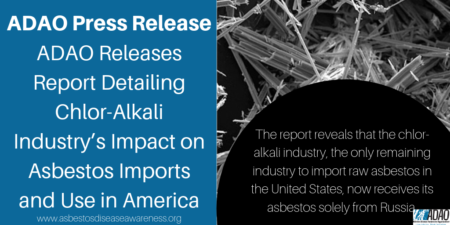 “The continued importation of asbestos, a deadly carcinogen, to boost the private profits of a handful of corporations while risking the health and safety of millions of Americans is reprehensible and unjustified,”  said ADAO’s co-founder and president Linda Reinstein. “Americans continued to be exposed to asbestos as it travels from the mine, to the ports, to the plant, and to landfills. There is absolutely no safe or controlled use of this deadly product. Nearly 70 countries have banned asbestos, but it remains legal and lethal in the U.S. today. Asbestos kills nearly 40,000 people per year in the U.S. ADAO’s findings demonstrate the multi-billion dollar chlor-alkali industry can readily stop importing and using raw asbestos and transition to non-asbestos processes that are safer and more efficient plants, but they have refused to make these changes.”.

According to the U.S. Geological Survey (USGS), the chlor-alkali industry is the only sector currently importing and using raw asbestos, although a number of products containing asbestos continue to be imported into the U.S.  Since 2011, USGS estimates that between 325 to 750 metric tons of asbestos were imported annually into the United States. In 2018, the U.S. International Trade Commission data revealed that asbestos imports to the U.S. increased by 101 percent.

The chlor-alkali industry, which reports sales of over $8 billion a year, uses asbestos to make semipermeable asbestos diaphragms in the manufacturing of chlorine and caustic soda. Presently, there are 27 chlor-alkali plants using non-asbestos processes, while 15 plants, owned by just four companies, continue to import and use deadly raw asbestos.

This report follows news that the White House will spend $250,000 to remove  asbestos from the West Wing, which will force a number of senior aides, including Ivanka Trump and Stephen Miller, to relocate for now. This removal comes despite the fact that President Trump has repeatedly  voiced his support for asbestos.