ADAO’s New Video: 30 Years After the EPA Failed to Ban Asbestos — A Ban is Insight

Report Looks at Public Health, Environmental, and Economic Impact of Continued Asbestos Use and Exposure 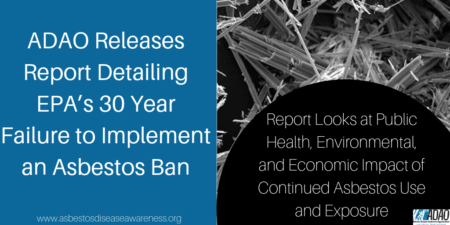 Washington, D.C. – The Asbestos Disease Awareness Organization (ADAO), the largest nonprofit dedicated to preventing asbestos caused-diseases, today released a new report detailing the inaction on the part of the EPA for the past 30 years to effectively ban asbestos.  The report, EPA’s Failure to Ban Asbestos: The Impact from 1989 – 2019 on Public Health, Environment, and the Economy, documents the very real dangers associated with asbestos exposure, industry’s continued use and government exemptions,  asbestos consumption metrics, and policy history associated with ban efforts.

“Asbestos victims and their families have been begging policy and lawmakers to take action for decades,” said ADAO co-founder and President Linda Reinstein. “While they have allowed asbestos imports and use to continue in the United States, one million Americans have died of asbestos-related disease and more continue to be exposed to this deadly substance every day. The human cost of inaction is simply too high. These deaths are preventable—the only thing we need is the will to put public health before private profits.”

On July 12, 1989, the EPA attempted to place the health and safety of Americans at the forefront of their agenda with a full ban on asbestos. However, the ban has been thwarted by industry lobbyists and distorted facts that don’t tell the truth about the dangers of asbestos.

Asbestos has been found in homes, schools, industrial buildings and products, as well as unsuspecting consumer products including children’s toys, cosmetics and crayons. And though many Americans likely believe that asbestos has already been banned, it remains legal and lethal.  There is no safe level of exposure. The need for this report is clear as unethical administration changes at the EPA become even more questionable. As this report was being written, it was announced that Nancy Beck, the controversial deputy assistant administrator of EPA’s toxics office and a former chemical industry lobbyist, is heading to the White House. She is being replaced by David Fischer from the American Chemical Council.

In the face of this ongoing threat and EPA’s inaction, ADAO continues to urge Congress to pass the Alan Reinstein Ban Asbestos Now Act of 2019 (ARBAN).

“For 30 years public health has taken a back seat to private profit. The time to end this is now,” said Reinstein. “We are hopeful that this report will help shed light on important facts that don’t distort the truth and will ultimately lead to the EPA’s support for a full ban, and Congressional action to make it happen.”

The Asbestos Disease Awareness Organization (ADAO) was founded by asbestos victims and their families in 2004. ADAO is the largest non-profit in the U.S. dedicated to providing asbestos victims and concerned citizens with a united voice through our education, advocacy, and community initiatives. ADAO seeks to raise public awareness about the dangers of asbestos exposure, advocate for an asbestos ban, and protect asbestos victims’ civil rights. For more information, visit www.asbestosdiseaseawareness.org. ADAO, a registered 501(c)(3) nonprofit organization, does not make legal referrals.