The Chlor-Alkali Industry is Responsible for 100% of Raw Asbestos Imports, Endangering American Lives 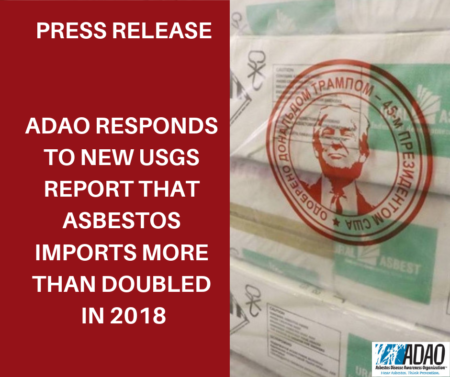 According to the 2019 USGS report, U.S. imports of asbestos more than doubled within a year, from 332 metric tons of raw chrysotile asbestos in 2017 to 750 metric tons in 2018. The USGS reiterated that the chlor-alkali industry remains responsible for nearly 100% of U.S. asbestos imports and that ‘numerous materials’ provide suitable substitutes for asbestos.

“Nearly 40,000 Americans die each year from preventable asbestos-caused diseases, yet the EPA allows for imports and use to continue,” said Linda Reinstein, President and Co-Founder of ADAO. “According to the EPA, Olin Chemical, Occidental Petroleum Corporation, and Axial/Westlake are the primary importers of raw asbestos. In 2018, more than $1,000,000 USD was spent purchasing deadly raw chrysotile asbestos from Brazil and Russia. Uralasbest, the largest Russian asbestos producer, marketed tons of toxic chrysotile asbestos to American importers with an image of President Donald Trump and the slogan ‘Approved by Donald Trump, 45th President of the United States.’  While more than 60 nations around the world have completely banned asbestos, the United States government remains complicit in the deaths of thousands each year from illnesses caused by asbestos exposure as they allow these imports to continue.”

The USGS also stated that several asbestos-containing products are being imported into the U.S. in addition to the 750 metric tons of raw chrysotile, including asbestos-containing brake materials, rubber sheets for gaskets, tile, wallpaper, and potentially asbestos-cement pipe and contaminated knitted fabrics, but the amount is “unknown.”

Because vital information about the levels of asbestos in imported products and their use in the U.S. is not available, ADAO petitioned the EPA in the fall of 2018 to require reporting by importers and users of these products under the Toxic Substances Control Act (TSCA). EPA denied the petition in December. ADAO and other groups are currently challenging the petition denial in court.

“Trump’s EPA has repeatedly shown its disinterest in regulating asbestos, a known carcinogen,” said Reinstein.  “It is reprehensible that the EPA allows for hundreds of tons of raw asbestos and contaminated consumer products, like children’s crayons and make-up marketed to tweens at Claire’s and Justice stores, to be brought into the U.S. It’s time for Congress to move expeditiously to pass The Alan Reinstein Ban Asbestos Now Act, a comprehensive, no-exemptions ban of this deadly fiber.”