ADAO Statement Calls for the Reauthorization of the James L. Zadroga 9/11 Health and Compensation Act 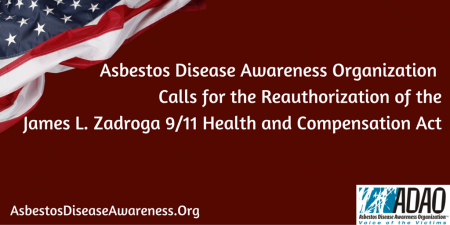 “As we remember that fateful day when the world watched in horror as two planes crashed into the World Trade Center (WTC) during the September 11 terrorist attacks, we must not forget the continued need for health support and justice for 9/11 victims. As the buildings smoldered, firefighters, first responders, and volunteers who rushed to save the thousands of innocent people inside and around the buildings, were blanketed in dust consisting of hundreds of chemical substances including the 1,000 tons of asbestos used in the construction of the Twin Towers.

“Jon Stewart, former Daily Show host, will again be using his voice to lobby Congress this week for a permanent extension of the James Zadroga 9/11 Health and Compensation Act, which is set to expire at the end of September. The halls of Congress will be filled with firefighters, police, and first responders who now suffer from illnesses including cancer, caused by their heroic work at Ground Zero. We join Mr. Stewart with a strong call to Congress to perpetuate the much needed funding for the 72,000 responders and survivors from every Congressional district who are enrolled in health programs provided by this legislation.

“The pulverized WTC debris – laced with toxic substances including asbestos, ground glass, lead, gypsum, and calcite – was scattered across lower Manhattan. Amidst the rubble, thousands inhaled and swallowed hazardous debris, but the EPA reassured residents that the air ‘is safe to breathe and the water is safe to drink.’ Later, however, investigations found that the EPA had no basis for its pronouncements about air quality. A 2006 study by New York’s Mount Sinai Hospital found that ‘seven out of ten World Trade Center rescue and wreckage workers had new or worsened lung problems after the attacks.’

“Since 2002, the World Trade Center Program has medically screened more than 39,000 WTC rescue and recovery workers and volunteers and confirmed ‘2294 certified cancer cases documented from 2002 to present day’ for these heroic victims. In addition, the newly released The Global Burden of Disease, Injuries, and Risk Factor Study of 2013 from the prestigious Lancet journal, cites an alarming 194,000 deaths due to occupational asbestos exposure in 2013, an increase of 90,000 over the World Health Organization statistic of 107,000 per annum. First responders like those who risked their lives on 9/11, make up a significant part of this number.

As part of its comprehensive education and advocacy efforts, ADAO reminds concerned citizens to “Raise Your Voice” to #ENDMeso and send a letter to Congress and tell them to stand up for Americans and ban asbestos.

About the Asbestos Disease Awareness Organization
The Asbestos Disease Awareness Organization (ADAO) was founded by asbestos victims and their families in 2004. ADAO is the largest non-profit in the U.S. dedicated to providing asbestos victims and concerned citizens with a united voice through our education, advocacy, and community initiatives. ADAO seeks to raise public awareness about the dangers of asbestos exposure, advocate for an asbestos ban, and protect asbestos victims’ civil rights. For more information, visit www.asbestosdiseaseawareness.org. ADAO, a registered 501(c)(3) nonprofit organization, does not make legal referrals.