WASHINGTON–The Asbestos Disease Awareness Organization (ADAO), which combines education, advocacy, and community to help ensure justice for asbestos victims, today announced its support for the Alan Reinstein and Trevor Schaefer Toxic Chemical Protection Act, introduced by Senators Barbara Boxer (D-CA), Ranking Member of the Environment and Public Works Committee, and Edward Markey (D-MA), Ranking Member of the Subcommittee on Superfund, Waste Management, and Regulatory Oversight. The bill provides critical safeguards to protect children and communities from the dangers of toxic chemicals and specifically calls for a ban on asbestos.

“The fact that the Vitter-Udall bill will not even restrict, much less ban, the deadly substance that claims 30 lives a day is nothing short of a national travesty” 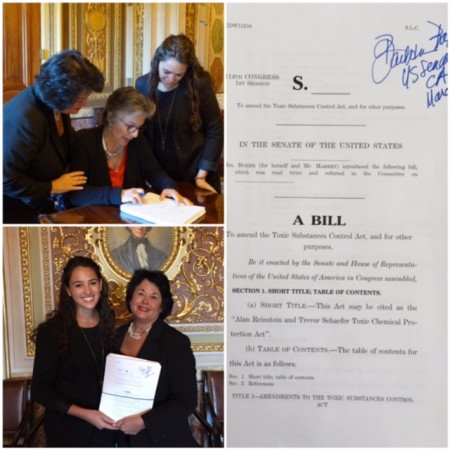 The bill is named in honor of two cancer victims – Alan Reinstein and Trevor Schaefer. Alan lost his battle to mesothelioma in 2006 at the age of 66 and was the beloved husband of ADAO President Linda Reinstein, who co-founded ADAO in 2004. Trevor Schaefer, a victim of toxic exposure, was diagnosed with brain cancer at the age of 13.

Ms. Reinstein stated: “ADAO applauds Senator Boxer and Senator Markey for their leadership in helping to take further steps to eliminate exposure to asbestos, a known carcinogen that has caused the most occupational deaths in history. This bill, named after my late husband Alan, represents not only his courageous battle with mesothelioma, which he lost nine years ago, but it also represents the hundreds of thousands of other asbestos victims – past, present, and future – along with Americans who’ve been affected by other toxic chemicals. Asbestos is still legal and lethal in the United States, and the Alan Reinstein and Trevor Schaefer Toxic Chemical Protection Act will enable the EPA to, once and for all, ban asbestos. ADAO has worked with a coalition of more than 450 organizations, who support real TSC reform. I am certain everyone will be supportive and grateful for its introduction and passage.”

“The fact that the Vitter-Udall bill will not even restrict, much less ban, the deadly substance that claims 30 lives a day is nothing short of a national travesty,” said Reinstein. “Any Senator who supports this industry proposal is in essence supporting the continuation of the toll asbestos has already had on millions of American families. The bill, embraced by the chemical industry, will only expose future generations to asbestos and many other highly toxic chemicals.”

Despite its known dangers, the U.S. has failed to ban asbestos and imports continue. Each year, asbestos claims the lives of 10,000 Americans. Exposure to asbestos, a human carcinogen, can cause mesothelioma, lung, gastrointestinal, laryngeal, and ovarian cancers; as well as non-malignant lung and pleural disorders. The World Health Organization estimates that 107,000 workers around the world will die every year of an asbestos-related disease, equaling 300 deaths per day.