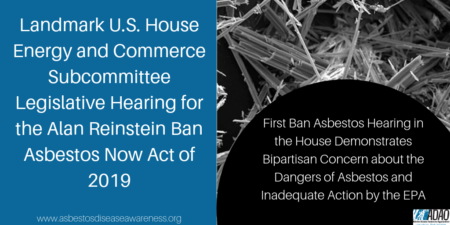 Washington, D.C. – May 10, 2019 – The Asbestos Disease Awareness Organization (ADAO), the largest nonprofit dedicated to preventing asbestos caused-diseases, testified before the U.S. House Energy and Commerce Subcommittee on Environment and Climate Change during the legislative hearing entitled, “Ban Asbestos Now: Taking Action To Save Lives And Livelihoods” which built on H.R. 1603, the Alan Reinstein Ban Asbestos Now Act of 2019.

“This legislative hearing is a landmark step forward for the bicameral Alan Reinstein Ban Asbestos Now Act of 2019 and confirmed that there is deep bipartisan concern about the ongoing health risks from asbestos,” said Linda Reinstein, President and Cofounder of the ADAO. “Since 1991, an estimated 1 million Americans have died prematurely because of preventable and painful asbestos-caused diseases. Science and history have confirmed there is no safe level of asbestos exposure or controlled use; however, hundreds of tons of raw asbestos are imported and used each year, primarily by the Chlor-Alkali industry. ADAO isn’t alone. Career Environmental Protection Agency (EPA) staff are voicing their objections to the lack of effective EPA action; however, the EPA leadership is ignoring public and staff comments as they move forward with a weak and incomplete risk evaluation and a Significant New Use Rule (SNUR) that leaves the door open to bringing back obsolete asbestos products. We were pleased the hearing concluded with bipartisan discussions about moving H.R. 1603 forward to protect Americans.”

“The legislative hearing on the Alan Reinstein Ban Asbestos Now Act proved to be exceptionally productive, with valuable and moving testimony from prominent experts including Linda Reinstein,” said Environment and Climate Subcommittee Chairman Tonko. “My great hope is that our committee and subcommittee will use the experience and insights we gained to find a path forward for this important legislation that we already know would save lives and safeguard public health.”

“It’s outrageous that the EPA began talking about banning asbestos 40 years ago and it’s still being sold today. Despite the well-documented health effects of asbestos exposure, the Trump Administration continues to support the importing of this toxic substance and refuses to address asbestos that is already in homes and buildings around the country. We cannot wait any longer to act, and that’s why we held this legislative hearing on the Alan Reinstein Ban Asbestos Now Act,” said Chairman of the Energy and Commerce Committee Frank Pallone, Jr. “Congress must pass this legislation to ban asbestos once and for all.”

“Asbestos related diseases still kill about 40,000 Americans every year, yet the EPA has failed to take meaningful action to protect communities,” said Rep. Suzanne Bonamici.  “My legislation, the Alan Reinstein Ban Asbestos Now Act, would finally ban the import and manufacture of the deadly fiber. I am grateful for the work of Chairman Pallone and Chairman Tonko for holding a hearing on this important legislation, and to Linda Reinstein for testifying on behalf of all the families who have been harmed by asbestos.”

“Asbestos poses an extreme public health risk, and it’s absurd that it is still allowed in the United States,” said Senator Jeff Merkley. “This toxic chemical is out of control. Between the use of asbestos in everyday products and its remaining presence in homes, schools, and businesses, millions of Americans are at risk. If the EPA won’t do its job, then it’s time for Congress to step up and fully ban asbestos.”

“We know that many plants in the chlorine industry have converted to non-asbestos processes at a reasonable cost and without limiting the supply of chlorine, said Bob Sussman, ADAO counsel and former senior EPA official under Presidents Clinton and Obama. “There’s no reason the three US producers that continue to use asbestos can’t do the same thing without disrupting our economy.”

“Asbestos is a potent carcinogen. There is no safe level of exposure to it,” said APHA member Celeste Monforton, DrPH, MPH, a lecturer at Texas State University and George Washington University, before the Subcommittee on Environment and Climate Change of the House Committee on Energy and Commerce. “More than 60 countries have banned asbestos because they recognize its grave risk to public health. It is long past time for the U.S. to prohibit any person or company to manufacture, import, process or distribute in commerce asbestos or any mixture or article containing asbestos.”

“One of the worst things about asbestos is that most people think it is no longer a problem in the U.S. when in fact, it is the most significant and devastating occupational health disaster that has lasted over a century in this country,” said Rebecca Reindel on behalf of AFL-CIO. “Hundreds of thousands have died. OSHA cannot do this. EPA has not done this. We urge the committee and the Congress to move without delay to enact this lifesaving bill.”

“There is overwhelming consensus in the scientific community that there is no safe level of exposure to asbestos,” said Georges C. Benjamin, MD, executive director of APHA. “Asbestos causes mesothelioma and cancer of the lung, larynx and ovaries. Exposure to asbestos is also strongly associated with asbestosis and pleural disease.”

Opening Statement of Chairman Pallone as prepared for delivery

Opening Statement of Subcommittee Chairman Tonko as prepared for delivery

About ADAO
The Asbestos Disease Awareness Organization (ADAO) was founded by asbestos victims and their families in 2004. ADAO is the largest non-profit in the U.S. dedicated to providing asbestos victims and concerned citizens with a united voice through our education, advocacy, and community initiatives. ADAO seeks to raise public awareness about the dangers of asbestos exposure, advocate for an asbestos ban, and protect asbestos victims’ civil rights.  For more information, visit www.asbestosdiseaseawareness.org.