In a letter to Speaker Pelosi the nation’s top scientific experts on the public health call on the U.S. Congress to take immediate action 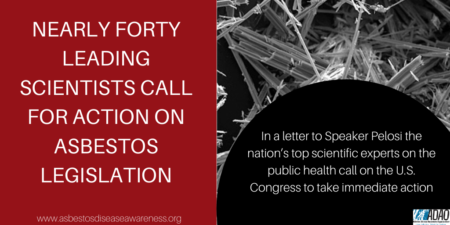 The letter was signed by more nearly forty prominent scientists who have devoted their careers to combatting the health-related consequences of asbestos use.

“The public will not be protected unless we ban all asbestos mining, importation and use,” they write.

Terming ARBAN “a strong bill to protect public health,” the scientists emphasize that ARBAN “provides Congress with a unique opportunity to eliminate asbestos from US commerce.”

Richard A. Lemen, PhD, MSPH, Assistant Surgeon General (Ret.), Rear Admiral, USPHS (Ret.) said, “The broad consensus from the scientific community is that ARBAN will deliver immediate public health protection and that Congress should seize the moment to strike a blow against the continuing threat asbestos poses to the health of Americans.”

The letter from the scientists also addresses questions about ARBAN’s definition of asbestos, emphasizing that, “The current definition will achieve the public health benefits of the bill.” It further states that these benefits should not be delayed while experts work “to improve the definition of asbestos in order to inform future legislative and regulatory actions.”

ARBAN was approved by the Energy and Commerce Committee by a vote of 47-1 on November 19, 2019. It is currently pending before the full U.S. House of Representatives.

Linda Reinstein, ADAO’s executive director and co-founder, said, “With strong-bipartisan support and the backing of the nation’s leading asbestos experts, we need to bring ARBAN to the House floor for passage without delay.”

Today’s letter builds on the January 16 ARBAN joint support letter to Speaker Pelosi from AFL-CIO, APHA, and many others reiterating that there is no safe level of exposure to asbestos and calls on the United States to join the nearly 70 countries that have banned this dangerous substance.

ARBAN would ban all importation and use of asbestos and asbestos-containing products within one year of enactment with a special transition process for the chlor-alkali industry, which would have 5 years to stop asbestos imports and 5 more years to convert to asbestos-free technology.

Addressing a long-neglected pathway of asbestos exposure with important public health impacts, the National Academy of Sciences (NAS) would conduct a comprehensive study of risks presented by “legacy” asbestos found in millions of buildings nationwide.

ARBAN would also create a Right-to-Know program that requires all those who have imported and used asbestos and asbestos-containing products over the last three years to report to EPA and identify how much asbestos is involved, where and how it is used and how many people are exposed.