BLOG: U.S. Senate and House of Representatives Introduced The Alan Reinstein Ban Asbestos Now Act of 2019 (ARBAN) — Bill Would Ban Asbestos Importation and Use Within One Year of Enactment 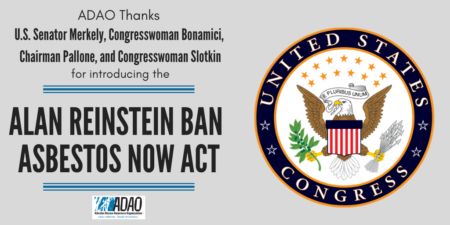 Linda Reinstein, President of the Asbestos Disease Awareness Organization (ADAO) and widow to the bill’s namesake said, “ADAO is thankful to Sen. Merkley, Congresswoman Bonamici, Chairman Pallone, Congresswoman Slotkin and the many original cosponsors for their leadership and dedication to public health. The Alan Reinstein Ban Asbestos Now Act of 2019 (ARBAN) will take long-overdue action to stop hundreds of tons of raw asbestos imports and asbestos containing products from entering the U.S. It will protect all Americans — workers, consumers, and children — from being exposed to this deadly threat.  Asbestos remains legal, lethal, and a far too common threat. With the passage of ARBAN, we will finally join over 60 countries who have put public health over corporate profit and banned asbestos.”

“It’s outrageous that in the year 2019, asbestos is still allowed in the United States,” said Senator Jeff Merkley. “While the EPA fiddles, Americans are dying. It’s time for us to catch up to the rest of the developed world, and ban this dangerous public health threat once and for all.”

“Asbestos causes disease and death, and we must protect families and communities from this known carcinogen,” said Congresswoman Suzanne Bonamici. “It is unacceptable that Oregonians and thousands of people across the U.S. continue to die from asbestos-related diseases each year. I am proud to introduce the Alan Reinstein Ban Asbestos Now Act, legislation to ban the importation, manufacture, and distribution of asbestos. I thank my colleagues, Senator Jeff Merkley and Chairman Frank Pallone, and look forward to continuing working with them to advance this lifesaving bill.”

Current research estimates that nearly 40,000 Americans die annually as a result of asbestos-caused diseases. Scientists agree that there is no safe level of exposure to asbestos. The United States is the only western industrialized nation that has not yet banned asbestos.

The largest importer of asbestos is the chemical industry, which uses it in chlor-alkali plants that make industrial chlorine and caustic soda. Reinstein added “These plants have been increasing their asbestos imports, even though alternative asbestos-free processes are economically viable and widely used around the world. ARBAN will put a stop to this irresponsible practice and force these companies to follow the example of competitors who have done the right thing by eliminating asbestos from their operations.”