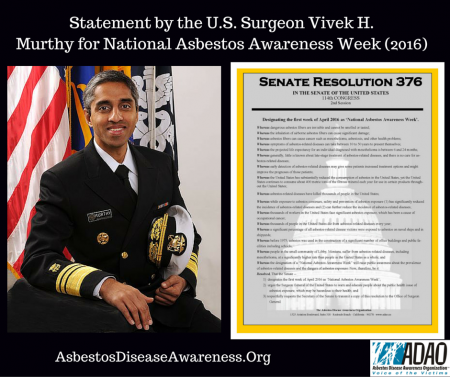 Dedicated to awareness and prevention, during Global Asbestos Awareness Week, each day features educational resources from leading organizations, guest blogs, videos, and asbestos victims’ stories. This year’s week saw a huge influx of support from across the globe with an increase in training and educational resources, community sharing, and participation from a wide variety of like-minded organizations. The U.S. held its own National Asbestos Awareness Week, which was directly supported by a diverse range of bi-partisan elected officials as well as the U.S. Surgeon General, Vice Admiral Murthy.

An excerpt from U.S. Surgeon General Murthy’s warning made this important point: “National Asbestos Awareness Week is April 1-7 – a good time to remind Americans about the health dangers of asbestos exposure. Asbestos, a natural mineral fiber that is found in rock and soil, was widely used as insulation and fireproofing material in homes, commercial buildings, ships and other products, such as paints and car brakes.”

“As this year’s Asbestos Awareness Week comes to a close, we are certainly grateful and encouraged by the immense amount of collaboration we have experienced from around the world with one mutual aim: informing our global citizens about asbestos dangers,” stated ADAO Co-founder and President Linda Reinstein. “We’ve been sponsoring these weeks for more than a decade and this year, we’re honored to be able see it culminate with such an important message from our U.S. Surgeon General about the risks associated with asbestos exposure and how widely used it has been. We are hopeful that this key message will further underscore the need to implement a ban here in the U.S. and globally. One day, I know we will see an end to the tragedy of asbestos related disease, and we thank Vice Admiral Murthy for his role in helping to influence this milestone.”

Since its founding in 2004, ADAO has worked with the U.S. Senate to unanimously pass twelve Asbestos Awareness Week Resolutions and secured five U.S. Surgeon General asbestos warnings in an effort to prevent exposure to eliminate deadly asbestos-caused diseases.

Exposure to asbestos, a human carcinogen, can cause mesothelioma, lung, gastrointestinal, colorectal, laryngeal, and ovarian cancers; as well as non-malignant lung and pleural disorders. The World Health Organization (WHO) estimates that 107,000 workers around the world will die every year of an asbestos-related disease, equaling 300 deaths per day.