Sign and Share the Petition to the U.S. Environmental Protection Agency Urging Them to Ban Asbestos Now Without Loopholes or Exemptions 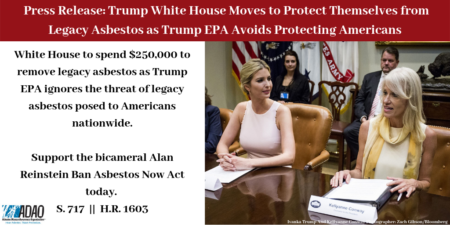 WASHINGTON, DC — As reported today by Bloomberg an asbestos removal effort is underway at the White House to rip out deadly legacy asbestos. The abatement, which is being done on ceilings and attic spaces in the West Wing will cost taxpayers $250,000.

Asbestos is still legal and lethal in the U.S. It kills nearly 40,000 Americans each year, and 750 metric tons of the known carcinogen were imported in 2018. Russia has recently become the prime source of the asbestos imported into the United States.

Older buildings, like the White House, are often riddled with legacy asbestos, as are hundreds of thousands of structures across the nation. Legacy asbestos is found in homes, workplaces and schools and threatens the health and safety of all Americans. There is no safe level of exposure to asbestos.

“While the United States government has allowed asbestos imports and use to continue, 1 million Americans have died of asbestos-related disease and more continue to be exposed to this deadly substance every day,” said ADAO co-founder and President Linda Reinstein. “The human cost of inaction is simply too high. These deaths are preventable—the only thing we need is the will to put public health before private profits.”

Trump has stated his support for asbestos multiple times. In his 1997 book, The Art of the Comeback Trump claimed asbestos is “100 percent safe, once applied.” Then in 2012, he tweeted that “if we didn’t remove incredibly powerful fire retardant asbestos & replace it with junk that doesn’t work, the World Trade Center would never have burned down.” Yet, on his watch, a quarter of a million dollars is being spent to remove the toxin–to protect the health and safety of his staff, including his own daughter.

As the Trump White House moves to protect themselves from the threat of legacy asbestos, the Trump EPA is working to ensure the rest of America remains at risk from this deadly substance. A proposed rule from the Trump EPA would ignore the risk posed by legacy asbestos present in our homes, schools, workplaces and already built infrastructure. Using a combination of legally indefensible exclusions and loopholes, deviations from accepted scientific methods, and refusal to accept previous peer reviewed determinations of risk, EPA’s political appointees have overruled career scientists and experts on staff to put forward the laughably weak regulation.

ADAO continues to fight for a strong federal ban on asbestos with no loopholes or exemptions and for regulations that will protect all Americans, not just those working in the West Wing, from the threat of legacy asbestos. In the face of the Trump Administration’s inaction, we urge Congress to pass the Alan Reinstein Ban Asbestos Now Act of 2019.