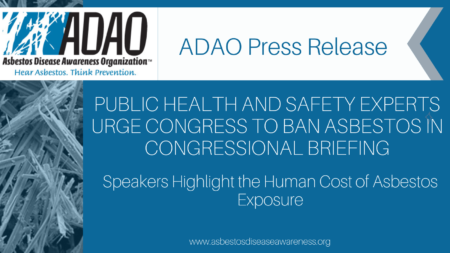 Washington, DC — The Asbestos Disease Awareness Organization (ADAO), an independent nonprofit dedicated to preventing asbestos exposure through education, advocacy, and community initiatives, today held its 17th Congressional Staff Briefing, “Impact of Asbestos on Public Health, Environment, and Economy.” Experts in medicine, science, and public health shared the latest updates with Congressional staffers and members about the need to ban asbestos imports and use in the United States.

“Congress has a duty to protect public health and safety and end the decades of unnecessary suffering and death that asbestos, a known fatal carcinogen, has brought to American families,” said Linda Reinstein, co-founder and President of ADAO.

“Only three companies — Olin, Occidental, and Westlake Chemical Corp — that operate eight chlor-alkali plants continue to import and use raw chrysotile asbestos instead of the viable and profitable non-asbestos options available and in use around the country and the globe. There simply is no reasonable justification for using asbestos in the 21st century when safer, environmentally-friendly, and economical substitutes exist. Congress needs to understand this rather than be misled by disinformation and fear-mongering the industry depends on to continually delay meaningful action,” Reinstein stated.

“Banning asbestos imports and use in the United States, as more than 70 other countries around the world have already done, is decades overdue and we will continue to push Congress to act to save lives,” she concluded.

The briefing featured a variety of experts who spoke to different aspects of the asbestos problem, including:

“There is no safe level of exposure to asbestos, a known carcinogen,” said Arthur L. Frank, MD, PhD, Professor of Public Health and Chair Emeritus of the Department of Environmental and Occupational Health at the Drexel University School of Public Health in Philadelphia, “Asbestos can cause disease and death when its microscopic fibers become dislodged and airborne,” he explained to staffers.

“Firefighters are twice as likely to suffer from mesothelioma compared to the U.S. population as a whole,” said Greg Russell of the International Association of Fire Fighters (IAFF). “The science is as clear as the threat — and we can stop this needless suffering with a ban on asbestos imports and use and a dedicated effort to reduce the risks of legacy asbestos,” he urged.

“Each year, over 40,000 Americans die from preventable asbestos-caused diseases,” noted Raja Flores, MD, Chair of the Department of Thoracic Surgery, Mount Sinai School of Medicine. “Congress can save more lives with a bill than I can with a scalpel,” he urged.

“The chlor-alkali industry is stonewalling on an asbestos ban even though the producers are rapidly shutting down asbestos-based capacity and transition to non-asbestos technology. “For three decades EPA has tried and failed to ban asbestos,” said Robert Sussman, ADAO Counsel and EPA senior official during the Clinton and Obama Administrations. “Congress must lead and finally put an end to asbestos importation and use,” he stated.

ADAO noted that EPA is continuing its important, necessary and overdue rulemaking, however it is insufficient to address the full range of threats from asbestos as its most recent rule is limited to 1 of 6 types of asbestos. ADAO urges Congress to act now and ban asbestos to fully protect public health from this silent killer by moving forward with the bicameral Alan Reinstein Asbestos Now Act (ARBAN) of 2022 which has been introduced by Senator Jeff Merkley (D-OR) and Representative Suzanne Bonamici (D-OR).

In 2021, an estimated 300 metric tons of raw asbestos was imported into the United States for the chlor-alkali industry, the sole user of raw asbestos.

For more details on the briefing, including expanded statements by the speakers, please visit: https://bit.ly/3dzVVCh

Founded in 2004, the Asbestos Disease Awareness Organization (ADAO) is the largest independent 501(c)(3) nonprofit in the U.S. dedicated to preventing asbestos exposure to eliminate asbestos-related diseases through education, advocacy and community initiatives.