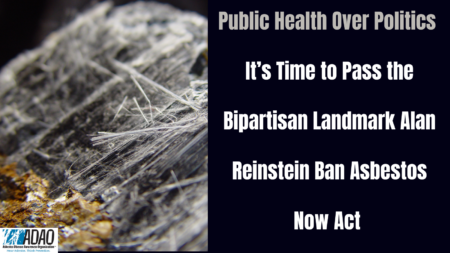 Tomorrow, November 19, marks the one year anniversary of when the U.S. House of Representatives Committee on Energy and Commerce voted 47-1 to approve the Alan Reinstein Ban Asbestos Now (ARBAN) Act of 2019 (AH.R. 1603) and send it to the House floor for passage. The vote highlighted the strong bipartisan support behind saving American lives by banning asbestos in the United States.

When ARBAN moved out of the Committee, ADAO was and remains incredibly grateful to Representative Suzanne Bonamici, Chairman Frank Pallone, Ranking Member Greg Walden, Chairman Paul Tonko, and Ranking Member John Shimkus for their leadership. We were also grateful to Senator Jeff Merkley for his introduction of ARBAN in the Senate (S. 717). ARBAN is the most comprehensive asbestos ban bill put before Congress in 30 years. Put simply, this legislation will save lives. It will ban a toxic chemical that more than 70 countries around the world have already banned, and it will provide local authorities and communities with critical information they need to keep themselves safe from this lethal carcinogen. We are asking Congress to reach across the aisle to settle their differences on this bill and pass it out of the House and Senate before the end of the 116th Congress. Not only has ADAO asked Congress to pass ARBAN, but so have many Attorneys General, as well as numerous scientists, unions, and public health organizations.

We completely understand that the novel coronavirus pandemic has drastically changed the political priorities and landscape  this year. It has been a difficult and trying year for all. We respect the decisions the House of Representatives has made during this crisis. If the current Congress doesn’t pass ARBAN this year, we will be back at square one due to changes in the House and Senate. Starting over after so much work and cooperation has gone into writing a bill that has bipartisan support would be a disservice to all that the current Members have done to safeguard their constituents’ health.

We respectfully urge the 116th Congress to reconcile any remaining issues of concern and pass ARBAN out of the House so it can move to the Senate and finally, be signed into law. The time is now, as our lives depend on legislation to eliminate this toxin from our homes, schools, workplaces, and our environment.

It’s time to embrace bipartisanship and put public health ahead of politics.