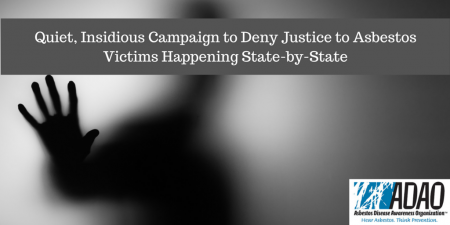 Over the last few years, legislation to delay and deny compensation to those sick and dying from asbestos-triggered diseases has been introduced and become law in 6 states.  Commonly referred to as the Asbestos Bankruptcy Trust Claims Transparency Act or the Fairness in Asbestos Claims Transparency (FACT) Act, the laws are similar, and originated with the Right Wing bill mill, the American Legislative Exchange Council, or ALEC.

The states where the laws are already on the books include:

States where legislatures are currently considering similar proposals include:

At their core, these 6 state laws and the pending legislation awaiting action in 9 other states, are designed to erect a series of legal and administrative hurdles almost impossible to clear by plaintiffs and their attorneys BEFORE they can even set foot in a court room; much less see any measure of justice by way of compensation.

Some of those barriers common among many of the laws and bills include:

In some cases, the FACT Act legislation is introduced in conjunction with another, even more damaging piece of legislation commonly called the Asbestos Claims Priorities Act, which would require victims to file extensive documentation of their claims at the time of the complaint—greatly increasing pleading requirements specifically and only for asbestos plaintiffs—including:

This legislation would also greatly increase a plaintiff’s burden of proof at trial by requiring evidence of the “dose” of asbestos exposure from each defendant’s product, an impossible task given the size and nature of asbestos fibers.  Utah, Tennessee and Michigan legislatures are or will be considering legislation that incorporates the Asbestos Claims Priorities Act provisions.

ADAO will do its best to fight each of these asbestos industry assaults that would only re-victimize victims of asbestos disease. However, we are up against some of the biggest, wealthiest, most powerful corporations and special interest groups in the country, including the U.S. Chamber of Commerce.

We will need all the help we can muster.  The best way for asbestos victims and their families to get involved, especially those who live in states where legislation is pending, is to contact your local legislators and urge them to strongly oppose this anti-victims legislation.