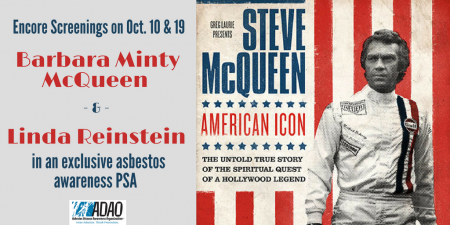 Presented by Greg Laurie and Harvest Ministries, the 90-minute feature documentary tells the story of one of America’s most enduring and intriguing movie stars of the 20th century, known as cinema’s “King of Cool.”

The McQueen & ADAO PSA was screened in nearly 800 locations where an estimated 100,000 viewers learned that asbestos remains legal and lethal in the USA.  Thanks to Barbi, ADAO was able to be part of this beautiful tribute to Steve McQueen’s life and proud of his widow for using her voice to prevent future senseless deaths from asbestos-caused disease.

Missed the premiere? No worries – there are two more chances to support the film. Encore screenings will be held on October 10 and October 19. Tickets for “Steve McQueen: American Icon” can be purchased online by visiting www.SteveMcQueenMovie.com or at participating theater box offices in the U.S.