Skip to content
Home/Blog/Advocacy/Legislative/Federal/Really — a SNUR!? The EPA Threw Americans a Bone Instead of an Asbestos Ban

Really — a SNUR!? The EPA Threw Americans a Bone Instead of an Asbestos Ban

On Wednesday morning, I received an unexpected call from Alex Dunn, Assistant Administrator for the Environmental Protection Agency’s Office of Chemical Safety and Pollution Prevention, notifying me that EPA would be promulgating its significant new use rule (SNUR) for asbestos in an hour.

While I appreciate that Ms. Dunn recognized ADAO as key stakeholder on asbestos prevention., and the professional courtesy of the call, I must express my deep disappointment with EPA’s decision to move forward with the SNUR. The rule requires that companies to notify EPA before potentially reintroducing  manufacturing, importing, and processing of asbestos for 19 obsolete products. EPA has continually tried to promote the SNUR as a ban, but we know that it is an industry smokescreen and is far from a ban. 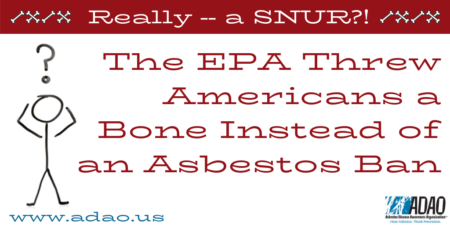 Asbestos is a known carcinogen that claims the lives of nearly 40,000 Americans every year. The SNUR is not a ban, it merely requires companies to notify EPA if they plan to reintroduce one of the obsolete asbestos products listed by EPA in the final rule. Only if EPA finds unreasonable risk, will the agency take action to restrict or ban the products. Ongoing uses of asbestos-containing products, raw asbestos imports, toxic toys, contaminated consumer products, and uses would be outside the scope of the SNUR and would continue without restriction.

Over the past 15 years ADAO has worked tirelessly to engage with EPA and represent the interests of asbestos victims and their families. We’ve had countless meetings with agency officials expressing our opposition to this rule and its failure to fully ban asbestos, and were heartened last week when EPA Administrator Andrew Wheeler committed to banning ongoing uses of this deadly mineral under TSCA. Unfortunately, the finalization of the SNUR calls that promise into question.

More than 60 nations around the world have put public health before corporate profits and banned asbestos. As Americans, we deserve the same from our government. A comprehensive solution to the threat of asbestos is long overdue and that is what the bicameral Alan Reinstein Ban Asbestos Now Act of 2019 offers. Congress must immediately move this lifesaving legislation forward to protect public health as the EPA has shown they are unwilling to do.

Unfortunately, the asbestos issue has become a partisan issue. As we all know, asbestos will claim the lives of anyone in its path. It makes no distinction between Democrats and Republicans, but the path forward requires support from our Republican colleagues.

We encourage everyone to call their Members of Congress and urge them to support the Alan Reinstein Ban Asbestos Now Act of 2019. It is time to ban asbestos now without loopholes and exemptions.

To get in contact with your Senators and House Representative, call this number: 202-225-3121, ask to be connected to your senators or representative, and tell them you would like their support to Ban Asbestos Now by supporting the Alan Reinstein Ban Asbestos Now Act of 2019. If your congresspeople have already signed onto the bill in support, please thank them for their leadership and urge them to continue to work hard towards an asbestos ban.

The time is now for the EPA to finish the job they started in 1989 to ban asbestos.

ARBAN supporters are listed below: