Skip to content
Home/Blog/ASBESTOS: Reflections on the 6th Anniversary of Lautenberg Chemical Safety for the 21st Century Act: The Wins, The Challenges and The Future to Banning Asbestos

ASBESTOS: Reflections on the 6th Anniversary of Lautenberg Chemical Safety for the 21st Century Act: The Wins, The Challenges and The Future to Banning Asbestos 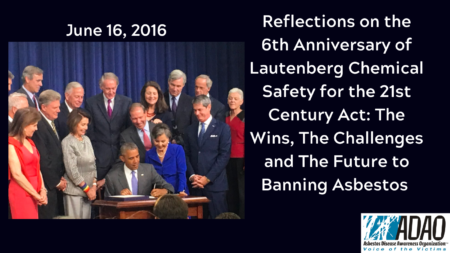 Today, on June 16, 2022, we celebrate the sixth anniversary of President Barack Obama signing The Frank R. Lautenberg Chemical Safety for the 21st Century Act (“LCSA”) into law. After many years of attempts to strengthen the Toxic Substances Control Act (TSCA), LCSA was a huge step forward in establishing a new integrated process for prioritizing toxic chemicals, conducting risk evaluations, and of course, risk management. I vividly remember sitting in a Congressional viewing room when President Obama reaffirmed that asbestos was the poster child for TSCA reform, as the EPA had failed to ban asbestos.

During the signing, President Obama said, “…the system [is] so complex, so burdensome that our country hasn’t even been able to uphold a ban on asbestos–a known carcinogen that kills as many as 10,000 Americans every year. I think a lot of Americans would be shocked by that.”

Following the signing, with massive NGO support, the Environmental Protection Agency (EPA) prioritized asbestos as one of the first ten chemicals for risk review and management. On April 5, 2022, the EPA released their proposed chrysotile asbestos rule to ban six conditions of use that “would ban chrysotile asbestos, the only known form of asbestos that’s currently imported into the U.S., which is found in products like asbestos diaphragms, sheet gaskets, brake blocks, aftermarket automotive brakes/linings, other vehicle friction products, and other gaskets also imported into the U.S.”

We know that all forms of asbestos, including chrysotile, are carcinogenic to humans. Once known as the “Magic Mineral,” this recognized human carcinogen was used in many industries, including construction, fireproofing, insulation, petrochemical, automotive, and ship building. Now, asbestos accounts for the majority of mesothelioma cases and causes a number of other cancers and fatal diseases. Nearly 40,000 Americans die from preventable asbestos-caused diseases every year. All forms of asbestos can cause mesothelioma and cancers of the lung, larynx, and ovaries. Today, there are at least seven pathways of exposure to asbestos: mining; transportation from mine to plant; storage at plants; processing raw asbestos for use; spillage and clean-up; disposal; and legacy asbestos, which can be found in millions of homes, schools, and workplaces nationwide.

Getting to President Obama’s signing of LCSA six years ago took over half a decade of work, and I will never forget standing in the room with my daughter Emily as we took such a landmark step forward in the fight against asbestos exposure. However, since then, around 240,000 Americans have died as a result of asbestos-caused diseases. There is still so much work to be done. That’s why we hope that Congress uses this anniversary to move the Alan Reinstein Ban Asbestos Now (ARBAN) Act of 2022 through to President Biden’s desk, where it can be signed into law. LCSA helped get us to this point, and we are infinitely grateful for all that EPA has done. However, we need legislation, not regulation, and it is past time to get there.

There is no safe level of asbestos exposure and no controlled use that eliminates risk. EPA’s proposed Part 1 chrysotile asbestos risk management rule, while a landmark step, is not a complete asbestos ban as it only bans one asbestos fiber and six conditions of use. Because of these facts, only comprehensive legislation that rapidly eliminates all asbestos from U.S. commerce will fully protect public health.

Why we still need a legislative ban

EPA’s proposed rule only addresses chrysotile asbestos. It does not restrict importation and use of five other amphibole asbestos fibers that are equally dangerous; Nor does it prohibit current or future uses of chrysotile asbestos beyond the six regulated conditions of use. We fought hard to have all six asbestos fibers; however, the previous Administration only selected chrysotile asbestos for review. Because of these gaps and limitations, the proposed rule is not a full asbestos ban. We need legislation, not regulation, which will only lead to legal challenges and yearlong tie-ups in courtrooms. Regulation leaves openings for loopholes, which a legislative ban would close.

To effectively safeguard public health, the five amphibole asbestos fibers (crocidolite (riebeckite), amosite (cummingtonite-grunerite), anthophyllite, tremolite and actinolite) must be prohibited. All conditions of use of chrysotile asbestos must also be banned.

This year, Biden’s EPA released a detailed report, Economic Analysis of the TSCA Section 6 Proposed Rule for Asbestos Risk Management, Part 1, that further supports the need to ban asbestos, not only regulate via the six limited conditions of use for chrysotile asbestos as defined in the Part 1 proposed rule.

According to EPA’s economic analysis, elimination of all remaining asbestos use in the chlor-alkali industry is not only feasible but will have economic and environmental benefits. This industry uses asbestos diaphragms to produce chlorine and caustic soda and often cites that chlorine and caustic soda are essential to water treatment. While true, according to industry reports, less than seven percent of chlorine production is dedicated to this use. Other nations around the world who have banned asbestos have successfully and economically met the needs of the water sector’s chlorine and caustic soda demand without using asbestos diaphragms. It is essential that we advocate for new and innovative ways to move forward that ensure safety and public health for all. The EPA has determined that asbestos use by this industry presents an unreasonable risk to the health of workers.

Only three plants in the U.S. still use asbestos- and yet, imports and use are on the rise

Recent data from the United States International Trade Commission (ITC) indicates that U.S. Industry has imported more than 114 metric tons of raw chrysotile asbestos in the first three months of 2022, which is a sum greater than the total annual asbestos imports from 2021.

According to the World Chlorine Council, 83 percent of the plants globally produce chlor-alkali membrane technology. In the U.S., the chlor-alkali industry is the sole importer and user of raw asbestos. According to EPA’s economic analysis, only three U.S. companies, Olin Corporation, Occidental Chemical Corporation and Westlake Chemical Corporation, use asbestos diaphragms at eight plants. The other 18 companies have invested in innovative and efficient alternatives.

It is not a question of if these remaining plants will convert to alternative diaphragms, but when. Recently, as a witness for the U.S. Senate Committee on Environment and Public Works Legislative Hearing on S. 4244, it felt as if we were are all in agreement that asbestos is a carcinogenic and there is no safe level of exposure — the only remaining issue is the timeline to transition the eight remaining chlor-alkali plants using asbestos diaphragms to non-asbestos alternatives.

We are so grateful for all the work that has been done since President Obama signed LCSA, and we are thankful for the EPA, our Congressional Members, and all ARBAN supporters. We hope Congress uses this anniversary to take the final step, and ban asbestos once and for all.