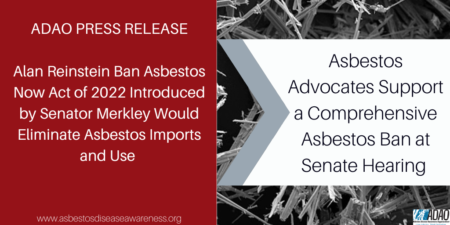 “We need a swift legislative solution to end the unnecessary death and disease caused by asbestos in the United States,” said Linda Reinstein, President and Co-founder of ADAO. “Over one million Americans have died since 1991, when the United States tried, but failed, to ban asbestos. We have known for nearly a century that asbestos is a deadly carcinogen that causes lung cancer, mesothelioma, cancers of the lung, larynx, and ovaries, and asbestosis. There is no safe or controlled use. It’s time for the US to join nearly 70 other countries and ban asbestos once and for all.”

The chlor-alkali industry is the sole importer and user of raw asbestos. Only three U.S. companies, Olin Corporation, Occidental Chemical Corporation and Westlake Chemical Corporation, use asbestos diaphragms at eight plants. The other 18 companies have invested in innovative and efficient alternatives. The Environmental Protection Agency (EPA) has determined that asbestos use by this industry presents an unreasonable risk to the health of workers.

Reinstein said that “industry’s dependance on asbestos is simply outdated and unnecessary.  It is not about if the chlor-alkali should transition from asbestos diaphragms to an alternative process, but when.”

According to EPA’s economic analysis, elimination of all remaining asbestos use in the industry is not only feasible but will have economic and environmental benefits.

“It’s time to stop the fear-mongering around the impact of a phaseout on the availability of chlorine and caustic soda for water treatment,” stated Reinstein. “This is a minor use that represents less than seven percent of chlorine production and the industry can easily prioritize meeting the needs of the water sector as it has in other nations around the world with an asbestos ban”

“We strongly encourage members of Congress, the industry and stakeholders to develop an asbestos diaphragm phase-out schedule that is expeditious, implementable and puts public health first,” Reinstein emphasized.

ADAO recognizes that EPA’s work on asbestos under TSCA is a strong step forward but legislation is needed because the EPA proposal would only ban one fiber, chrysotile asbestos, for only six conditions of use. There are five other deadly fibers and many more conditions of use that must be banned to truly protect the public from asbestos.

As an act of Congress, ARBAN will also avoid time-consuming and unproductive litigation over the Environmental Protection Agency’s pending rulemaking and prevent delays in protecting Americans at risk from asbestos exposure. “We urge Congress to swiftly pass this legislation and send it on to President Biden, where it can be signed into law and start saving lives,” concluded Reinstein.