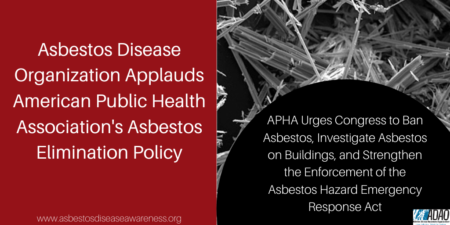 “APHA is sending a powerful message that exposure to asbestos is a grave public health matter,” said Celeste Monforton, DrPH, MPH, Member of APHA Action Board. “More than 70 countries have banned asbestos and it’s a national disgrace that the U.S. has not done so.”

As the policy statement cites, from 1900 to present day, more than 31 million metric tons of asbestos was used in the United States, much of which still resides in homes, schools, buildings, and consumer products. APHA urges the U.S. government to ban asbestos; identify the prevalence of asbestos-containing materials in existing structures, including schools; and strengthen enforcement of environmental and occupational health standards for asbestos.

“APHA has championed the health of people and communities for nearly 150 years. The 2019 “Eliminating Exposure to Asbestos” with its strong language aimed at preventing asbestos exposure to eliminate deadly diseases sends a strong message to policymakers that now is the time to act,” said Linda Reinstein, President, Asbestos Disease Awareness Organization. “I am also grateful for the APHA’s support for the bicameral Alan Reinstein Ban Asbestos Now Act (ARBAN). We can’t let history repeat itself — it is time to ban asbestos and fund educational and research programs to protect all Americans from this deadly threat.”

The policy statement, approved by APHA this week at its 147th annual meeting, updates an APHA statement adopted in 2009, with new scientific evidence and action steps.

According to the World Health Organization (WHO), there is no safe level of exposure to asbestos, and there is an increased cancer risk observed in populations with very low levels of exposure. WHO states that the most efficient way to eliminate asbestos-related diseases is to stop using all types of asbestos.

As reported by the U.S. Geological Survey, the sole U.S. importer of raw asbestos is the chlor-alkali industry. In 2018, the industry imported 750 metric tons of raw asbestos to manufacture industrial, chlorine and caustic soda.

Meanwhile, the Environmental Protection Agency (EPA) has been slow to take action, despite being empowered by Congress to do so with expanded authority in 2016. Their inaction puts vulnerable populations and communities at greater risk of exposure, which is why ADAO has urged Congress to pass ARBAN without delay.

Asbestos Disease Awareness Organization (ADAO) was founded by asbestos victims and their families in 2004. ADAO seeks to give asbestos victims and concerned citizens a united voice to help ensure that their rights are fairly represented and protected, while raising public awareness about the

The American Public Health Association works to advance the health of all people and all communities. As the nation’s leading public health organization, APHA strengthens the impact of public health professionals and provides a science-based voice in policy debates too often driven by emotion, ideology or financial interests. APHA is at the forefront of efforts to advance prevention, reduce health disparities and promote wellness.