The following is a joint statement between Linda Reinstein, co-founder and president of The Asbestos Disease Awareness Organization (ADAO), and Fernanda Giannasi, founder of the Brazilian Association of People Exposed to Asbestos (ABREA), in response to United States Geological Survey’s (USGS) recently release 2020 data on asbestos imports. 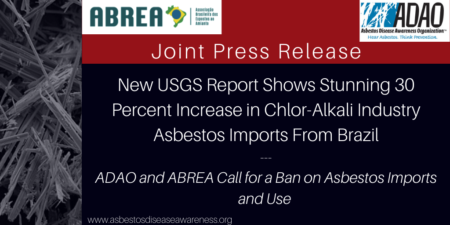 Washington, D.C.— On Friday, February 5, 2021, the U. S. Geological Survey (USGS) released 2020 data on asbestos imports, revealing the United States imported an estimated 300 metric tons of raw chrysotile asbestos into the country, an increase of more than 30 percent from the prior year. Almost all of these imports came from Brazil, a country that enacted a comprehensive national asbestos ban in November 2017.

“It is horrifying that the U.S. Chlor-Alkali industry imported over 30 percent more raw chrysotile asbestos in 2020 than in 2019,” said Linda Reinstein, ADAO president. “Each year, nearly 40,000 Americans die from preventable asbestos-related diseases. The facts are irrefutable. We know all six asbestos fiber types are carcinogenic, that there is no safe or controlled level of asbestos exposure, and management methods to reduce exposure are ineffective and endanger public health. Americans can’t wait — asbestos must be banned now.”

“It is a well-documented fact that asbestos is a known carcinogen that causes cancers of the lung, larynx, and ovaries, as well as mesothelioma and asbestosis. It is reprehensible that the United States is not only risking the lives of their own civilians, but is actively and knowingly risking the lives of workers in Brazil as well,” said Fernanda Giannasi, Associação Brasileira dos Expostos ao Amianto, and former Labor Inspector for the Ministry of Labor and Employment in Brazil.

“I urge the U.S. chlor-alkali industry to rethink their actions and stop killing Brazilians for your own gain. The U.S. has a pivotal role in this moment to convince other countries to stop mining, import/exporting, trading and using this lethal mineral,” Giannasi continued.

The USGS report states: “The chloralkali industry is the only remaining domestic consumer of asbestos in mineral form.”

ADAO and ABREA urge EPA and Congress to stop imports and use of asbestos now.

The U.S. attempted to ban asbestos in 1989; however, the ban was overturned two years later following a pro-asbestos industry legal challenge. The U.S. is the only western industrial country to allow lethal asbestos imports and use to continue.