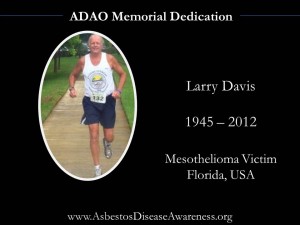 Larry Davis was a fierce fighter against mesothelioma- in his personal diagnosis,  in Washington DC, and in his home state of Florida. Diagnosed in July of 2006, Larry embodied the essence of General Patton’s quote, “lead me, follow me, or get out of my way.” Larry took no prisoners, and vigorously worked above and beyond to help fight the battle against asbestos. A longtime personal friend and stout ADAO supporter, Larry was a true hero, who tirelessly raised awareness on the harmful effects of asbestos exposure. ADAO was truly elated to present the Alan Reinstein Memorial Award to Larry Davis for his commitment to education, advocacy, and support to countless patients and families.

Larry put together the South Florida Miles for Meso Symposium, where friends, physicians, and advocates gathered to help spread awareness. He spent much of his time raising money for mesothelioma research wanting to help everyone affected by asbestos-caused ailments. Larry Davis took the fight against mesothelioma to the streets, and made a difference in so many lives.

Larry’s daughter, Courtney, wrote a tender blog “May There Be Rest And Peace …,” that you will want to read.

On behalf of the Asbestos Disease Awareness Organization, we send Larry’s entire family our sincere condolences and will honor his memory with our work to end the legacy of asbestos.

Larry, I’m going to miss you forever … plus one day.