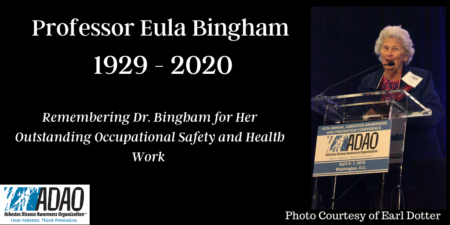 It is with great sadness in our hearts that the Asbestos Disease Awareness Organization (ADAO) announces the passing of our dear friend and advocate, Eula Bingham. Eula was recognized world-wide as a fighter for the health and safety of the working people. She served as Assistant Secretary of Labor for Occupational Safety and Health and Administrator of the US Occupational Safety and Health Administration (OSHA) from 1977 to 1981 in the Administration of President Jimmy Carter. Eula was also a Distinguished Professor Emerita of Environmental Health and former Vice President and University Dean for Graduate Studies and Research at the University of Cincinnati.

During her 90 years, Eula championed the fight for occupational health and safety. She believed and fought hard to make others believe that workers had the right to be safe on the job. The realization that workers were exposed to deadly carcinogens and toxins came when she was researching chemical carcinogenesis at the University of Cincinnati School of Medicine in the 1960s.

She dedicated her life to trying to make the workplace a safer place for all.

As the Collegium Ramazzini wrote in Eula’s eulogy, “Her bold and courageous actions prevented countless illnesses and injuries in workers around the world.”

In 1970, she saw the Occupational Safety and Health Act as an opportunity to protect workers against carcinogens like asbestos and other toxic chemicals. Eula went on to serve the Department of Labor Standards Advisory Committee on Carcinogens, which tried to prevent workplace cancer. This work led her to chair the Federal Research Standards Advisory Committee on Coke Ovens Emissions.

As Philip J. Landrigan, President of the Collegium Ramazzini writes in The American Journal of Industrial Medicine, “Dr. Bingham’s research and policy work in occupational safety and health led President Carter to nominate her on March 11, 1977 to be Assistant Secretary of Labor and OSHA Administrator.”

Eula served in that role until 1981. Her work resulted in the declaration of the occupational lead exposure standard, which many consider the most comprehensive and innovative occupational health and safety standard ever established in this country. During her tenure, OSHA also established the “Right-to-Know” standard, which gives workers the ability to know the chemical hazards they may face in their workplace. Among many other things, Eula’s work at OSHA also led to the promulgation of the cotton dust standard designed to protect textile workers in the American South from byssinosis. Collegium Ramazzini writes that those textile workers were the, “the poorest, least-represented, politically-powerless industrial workers in the nation.” Eula’s endless devotion, work-ethic and big heart helped protect hundreds of thousands of workers from deadly diseases.

In summarizing Dr. Bingham and her life’s work, President Jimmy Carter stated in 2015 “I was fortunate to have many outstanding appointments in our administration, and Eula was one of the best. I always could count on her for sound and direct advice with the well-being of the American worker foremost in her mind.  She helped eliminate barriers to women in the workforce and to make our nation’s workforce stronger and more productive.  Eula deserves credit as one of the unsung heroes giving women an important voice and place in our nation’s history.  We all should be proud of her service to our country.”

Eula was awarded many accolades and honors during her successful career, including the Asbestos Disease Awareness Organization’s Selikoff Lifetime Achievement Award in 2019.

“It is a distinct and humble honor that ADAO will be presenting the Dr. Irving J. Selikoff Lifetime Achievement Award to Dr. Bingham who exemplifies the highest qualities and dedication with her life’s work in occupational disease research, professional and worker training, and in workplace protections.” Dr. Richard A. Lemen, Retired Assistant Surgeon United States, said in 2019.

After leaving OSHA and returning to Cincinnati, Dr. Bingham collaborated with construction workers, work which culminated in the Former Worker Medical Screening Program, a national program to screen workers at its nuclear sites. She also became the second President of the Collegium Ramazzini, demonstrating her international commitment to worker safety and health issues.

After she departed from OSHA, a critic of Dr. Bingham once infamously decreed “the wicked witch is dead.” When receiving the Senator Philip Hart Award as a protector of the “Urban and Working Environment,” she responded: “Well, I’m here to tell you that the wicked witch is not dead. She’s merely rearranging her broom — and passing out a lot more brooms to her students.”

Dr. Carol Rice, one of Dr. Bingham’s teaching colleagues and Fellows of the Collegium Ramazzini, wrote of her death:

“On Saturday, the heart that embraced the rights of every worker stopped beating and Eula Bingham slipped away. She leaves a legacy of laboratory research relevant to the workplace, health and safety policy and regulations, students who went on to improve workplaces and the environment through professional practice and research, and generations of workers empowered to limit exposure to toxics. The Bingham ripples into the future are mighty: continued progress toward ’employment and a place of employment which are free from recognized hazards’ inches forward each day, as the winds blow beneath all those many wings she embolden to fly.”