Round One in ADAO’s Political Cartoon Trilogy: 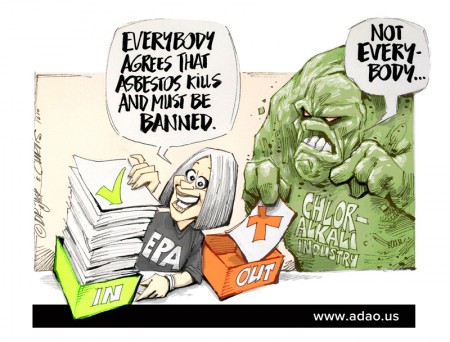 Presenting Round Two in the Asbestos Disease Awareness Disease’s political cartoon trilogy. This time around, we’re calling out the chlor-alkali industry for trying to secure permission to keep using deadly asbestos, even in the face of a ban.

The issue —which I wrote about earlier this month in the Huffington Post — isn’t immediately easy to understand, but this cartoon makes it simple: There’s widespread consensus from lawmakers, leading public health and environmental organizations, and even industry leaders that asbestos is unnecessarily dangerous and must be banned. The chlor-alkali industry stands in opposition, asking the Environmental Protection Agency (EPA) to exempt their so-called “safe” usage from any ban — a monstrous joke considering that in 2015, used 90% of all asbestos consumed in the US.

The EPA is tasked with announcing by December 22 10 high-risk chemicals for prioritized risk evaluation under newly the reformed Toxic Substances Control Act (TSCA). For many years, TSCA kept the EPA’s regulatory powers at the mercy of industry, but the new reforms finally empowered the agency to act on the most insidious chemicals in our environment. EPA  might be facing a quite a monster in this face-off with the American Chemistry Council (ACC) Chlorine Institute when it comes to addressing asbestos under this new law, but they have the support of big players — all the way up to President Obama himself, who singled out asbestos as the reason we needed stricter chemical regulation laws in this country.

This cartoon is meant to send a message — but we need you to help that happen. Please SHARE, SHARE, SHARE and let the EPA know that we, victims, trade unionists, OSH professionals, the scientific community, and others, need them to stand up to the chlor-alkali industry. The continued use of this known carcinogen would be the true monstrosity and the EPA cannot buckle under pressure now.

Together, we WILL achieve the ban we’ve been fighting so hard for.  Stay tuned – our third cartoon is coming and you will also meet the artists behind our campaign..