The event is free; however, please use the  Google form to RSVP. 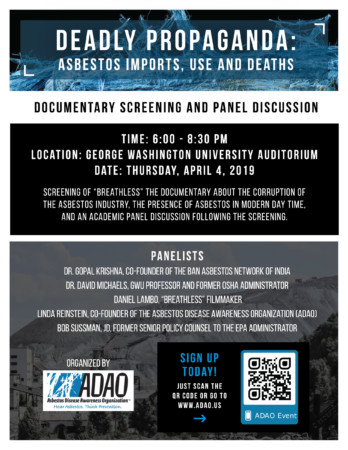 As we approach our 15th Annual International Asbestos Awareness and Prevention Conference, we are organizing exciting events surrounding the conference. One of these events is a screening of the asbestos documentary Breathless at George Washington University on Thursday, April 4th. The event will be held in the 700A – Case Room, Milken Institute School of Public Health, 950 New Hampshire Avenue NW, Washington DC.

The film tells the story of Daniel Lambo, whose father worked for a Belgium asbestos company. Both Lambo and Eric Jonckheere, whose parents and two brothers died from mesothelioma, traveled to India to expose the truth behind asbestos mining and use. The documentary examines the impact on their life, as well as the relentless propaganda used by the industry to peddle asbestos in developing countries.

Following the screening of the film, there will be a panel of experts to discuss the social and legal impact of asbestos and the asbestos industry, and answer questions from the audience. Among the panel are Dr. David Michaels, Professor in the Department of Environmental and Occupational Health at the Milken Institute School of Public Health of the George Washington University; Gopal Krishna from India, PhD; Daniel Lambo, Breathless filmmaker; Robert Sussman, former Senior Policy Counsel to the EPA Administrator; and myself- Linda Reinstein, Co-Founder of the Asbestos Disease Awareness Organization.

The screening is open to George Washington students, graduate students, conference attendees, and the public. We are excited to kick the conference off with such an important screening, and to spread the word of our ban asbestos movement. It is important that we ignite the fire to fight, in students so they are able to help us make change for future generations. The time to ban asbestos is now, and the film and academic panel will show the significance of this fight.

The event is free; however, please use the  Google form to RSVP.

Gopal Krishna, PhD has been a researcher and advocate on the subject of health hazards in hazardous industries like asbestos industry and ship breaking industry since 2000. He is the co-founder-convener of Ban Asbestos Network of India (BANI) and editor of BANI’s journal, www.asbestosfreeindia.org. He did his PhD from Centre of Social Medicine & Community Health, Jawaharlal Nehru University (JNU), New Delhi. His doctoral thesis is on industrial disaster of Bhopal and accountability of public institutions. He is law graduate and trained journalist Most recently he presented papers “Research on Chrysotile Asbestos: Failure of Ethics by National Institute of Occupational Health and National Human Rights Commission” at 14th World Congress of Bioethics in December, 2018 and “The future of work in the mirror of industrial disaster of Bhopal” at the XII International Conference on Labour History in March 2018. He is also a columnist and the editor of ToxicsWatch Journal, www.toxicswatch.org. He has been a petitioner in the National Human Rights Commission and Supreme Court of India.

Daniel Lambo, following the deaths of his father and many others from his village, filmmaker Daniel Lambo sets off on a passionate quest to find the truth about the deadly asbestos industry. His search takes him to the largest asbestos waste dump in India and unveils a cold-blooded industry still endangering the lives of workers and consumers around the world. A gripping story on the fight of individuals against a booming asbestos industry.

Linda Reinstein is the President/CEO and Co-Founder of Asbestos Disease Awareness Organization (ADAO). Reinstein became an activist when her husband, Alan, was diagnosed with mesothelioma in 2003. She co-founded ADAO in 2004, and now serves as President and CEO. Reinstein has been a strong political voice for justice in every major asbestos-related issue and has frequently served as a Congressional witness and presented at the Department of Labor (OSHA), British House of Commons, United Nations Congress, American Public Health Association, and to other audiences around the world. Recognized as an expert with over 40 years of nonprofit experience in building and sustaining grassroots organizations, Reinstein is dedicated to national and international asbestos disease prevention.

Bob Sussman, JD, is the principal in Sussman and Associates, a consulting firm that offers advice on energy and environmental policy issues to clients in the non-profit and private sectors. He is also an Adjunct Professor at the Georgetown University Law Center and was a Visiting Lecturer at Yale Law School. Bob served in the Obama Administration as Co-Chair of the Transition Team for EPA and then as Senior Policy Counsel to the EPA Administrator from 2009-2013. He served in the Clinton Administration as the EPA Deputy Administrator during 1993-94. At the end of 2007, Bob retired as a partner at the law firm of Latham & Watkins, where he headed the firm’s environmental practice in D.C. Bob was a Senior Fellow at the Center for American Progress in 2008. He is currently serving on the Board on Environmental Science of the National Academy of Sciences and as a Commissioner of the Interstate Commission for the Potomac River Basin. Bob is a magna cum laude 1969 graduate of Yale College and a 1973 graduate of Yale Law School. He has posted numerous blogs on the Brookings Institution Website and elsewhere and published articles in the Environmental Law Reporter and other publications.