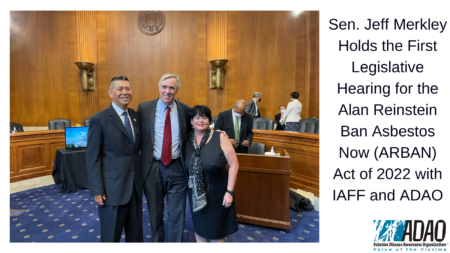 The Asbestos Disease Awareness Organization (ADAO) was honored to testify before the U.S. Senate Committee on Environment and Public Works during the Legislative Hearing on S. 4244 — Alan Reinstein Ban Asbestos Now Act of 2022, held on June 9, 2022. The bill was introduced by Senator Jeff Merkley and Representative Suzanne Bonamici on May 18, 2022.

This legislative hearing, which you can watch here, was a landmark step forward for the bicameral Alan Reinstein Ban Asbestos Now (ARBAN) Act of 2022 and proves once again that there is bicameral support for an asbestos ban.

“Ask any expert and they will tell you there simply is no level of exposure to asbestos that is safe for the human body,” said Senator Merkley in his opening remarks. “That’s why most of the developed world – over 60 nations – have acted to protect citizens by banning the commercial use of asbestos. Here in the United States, however, we have failed to do the same. And because we’ve failed to do so, too many of our fellow Americans are forced to sit at a loved one’s bedside, watching as they become another victim of these deadly fibers.”

“Make no mistake, this situation is completely preventable. Yet instead of protecting our citizens from this deadly substance, here in the United States we’re actually importing more of it,” Merkley continued. “We need to ban all forms of asbestos from our country. That is precisely what the Alan Reinstein Ban Asbestos Now Act of 2022 will do. The threat posed by asbestos affects all Americans the same, doesn’t matter what party they belong to – and the solution should likewise protect all Americans.”

The night before the hearing on Twitter, Senator Merkley shared a video that stated, “We’ve known for years that asbestos is a killer. But for far too long industry profits have been valued over the lives of firefighters, construction workers, and other people across the country who have been exposed to this toxic substance … the U.S. is lagging behind and putting lives at risk.”

“Asbestos, once thought to be a miracle compound, unfortunately, has turned into a nightmare that haunts fire fighters and wreaks havoc in their lives,” said Danny Whu M.D., Chief Medical Officer, International Association of Fire Fighters, during his testimony. “The OSHA safe level of asbestos is ZERO…70 other countries have banned asbestos; it’s time that we do the same…We owe it to fire fighters and their families to ban their killers like asbestos.”

We are grateful to the Subcommittee on Chemical Safety, Waste Management, Environmental Justice, and Regulatory Oversight of the Senate Environment and Public Health Committee for holding this important hearing on long-overdue legislation to ban asbestos, a lethal substance that has been prohibited by nearly 70 countries, but remains legal in the US.

“As a physician who has spent more than 50 years studying the hazards of asbestos, and knowing that there is no known safe level of exposure, with even one day of exposure leading to disease, it is important that the ARBAN bill is being considered by the EPW Committee in Congress and one can only hope that finally the US will join dozens of other countries in banning asbestos.” Arthur L. Frank MD, PhD, Co-Chair ADAO Scientific Advisory Board

“Testifying at today’s legislative hearing, before the U.S. Senate Committee on Environment and Public Works, Linda Reinstein, ADAO President/CEO & Co-Founder, left no stone unturned in a heartfelt and fact-filled testimony for why asbestos should be banned NOW in the United States, as it has been in over 70 other countries around the world,” said Dr. Richard A. Lemen, former Assistant Surgeon General of the United States, Co-Chair ADAO Scientific Advisory Board

During my oral testimony, I shared: “There are three irrefutable facts that provide a compelling case for this legislation, “All forms of asbestos, including chrysotile, are carcinogenic to humans. There is no safe level of asbestos exposure and no controlled use that eliminates risk. EPA’s proposed Part 1 chrysotile asbestos risk management rule, while a landmark step, is not a complete asbestos ban as it only bans one asbestos fiber and six conditions of use. Because of these facts, only comprehensive legislation that rapidly eliminates all asbestos from U.S. commerce will fully protect public health. ”

Witnesses at the hearing included:

“Today’s hearing made clear that the phaseout of asbestos in chlor-alkali production is only a matter of time and that replacement technology is proven and cost-effective,” said Bob Sussman, ADAO’s co-counsel. “The industry should enter into a real dialogue about how much time is necessary instead of creating false issues.”

Asbestos kills nearly 40,000 Americans each year. We have lost over one million Americans since 1991, the last time our government tried to ban asbestos, but failed. Yet we have known since the 1960s that asbestos is a deadly carcinogen that causes illnesses including mesothelioma, asbestosis, and cancers of the lung, larynx, and ovaries.

“Legislation can save more lives than I can. We need our politicians to do the right thing,” said Dr. Raja Flores, Chairman of the Department of Thoracic Surgery at Mount Sinai Hospital. 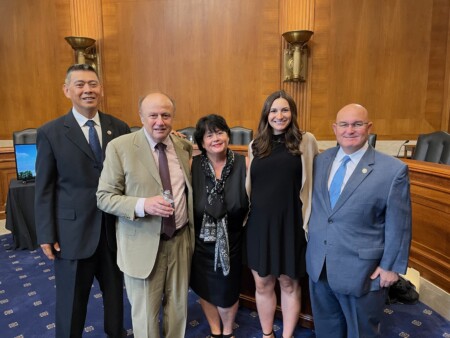 While EPA’s work on asbestos under TSCA is a strong step forward, legislation is needed because the EPA proposal would only ban one fiber, chrysotile asbestos, for only six conditions of use. There are five other deadly fibers and other  conditions of use that must be banned to truly protect the public from asbestos.

“The powerful testimony about the ongoing consequences of the use of asbestos illustrates that a ban is long overdue,” said Celeste Monforton, DrPH, MPH. “I’m confident that Senators and stakeholders can quickly work together to pass a bill and put a ban in motion.”

The chlor-alkali industry is the sole importer and user of raw asbestos. Only three U.S. companies, Olin Corporation, Occidental Chemical Corporation and Westlake Chemical Corporation, use asbestos diaphragms at eight plants. The other 18 companies have invested in innovative and efficient alternatives. The Environmental Protection Agency (EPA) has determined that asbestos use by this industry presents an unreasonable risk to the health of workers. 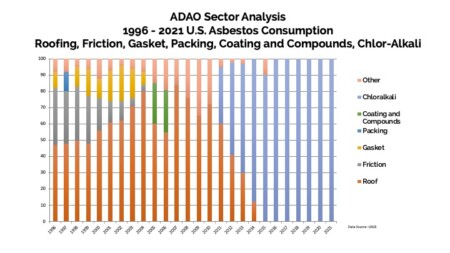 According to EPA’s economic analysis, elimination of all remaining asbestos use in the industry is not only feasible but will have economic and environmental benefits. Use of chlorine and caustic soda in water treatment represents less than seven percent of chlorine production and the industry can easily prioritize meeting the needs of the water sector as it has in other nations around the world with an asbestos ban. 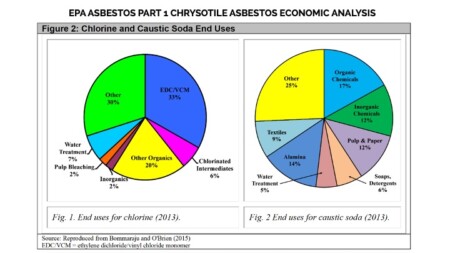 According to the World Chlorine Council, globally, 83 percent of the plants producing chlor-alkali use membrane technology.

“The chlorine industry in the US wants to keep running discredited, hazardous technology rather than modernize plants that are all over 40 years old,” said Barry Castleman ScD. “When asked at today’s hearing about the conversion of almost all the chlorine plants in Europe and Canada, the chemical industry representative wouldn’t even answer the question. Only a few chlorine manufacturers oppose banning asbestos in the U.S., so they can delay converting to improved technology. No one else testified in favor of the U.S. continuing to import asbestos products no longer even made here.”

This is by-far the most comprehensive asbestos ban legislation put before Congress in over 30 years. It will not only ban the commercial use of all six recognized asbestos fiber types, but it considers the needs of the mining industry and the economy affected by the industry — Senator Merkley worked directly with the mining, sand, stone, and gravel industries to address concerns and ensure the ban does not inadvertently create liability for natural impurities that occur in commercial activities for other substances.